10 Birds That Make People Think Of Aliens Instead Of Animals 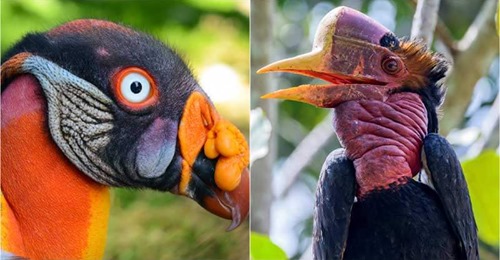 There is no limit in nature. It can always fill you with surprises and many people spend their whole life studying it. The world of animals is a part of it and is so interesting. You can find many animals out there whose features can shake the world a little. And this satisfies the curiosity of both kids and adults alike.

This post is about 10 birds that make people think of aliens instead of animals. There are approximately 10,500 known species of birds and 21,000 subspecies of birds in the world. 10 birds in the collection make a name for themselves with unique colors, shapes, and behavior. Mother nature favors them, making them shine in the way they were born. Let’s check them out!

Potoo birds also go by the name poor-me-ones. They are nocturnal and related to nightjars and frogmouths, living in Central and South America. These birds eat beetles, moths, grasshoppers, and termites.

As you can see, Potoo birds do not have bristles around their mouth. It’s interesting that these birds don’t fly but sit upright on tree stumps trying to camouflage in the daytime. 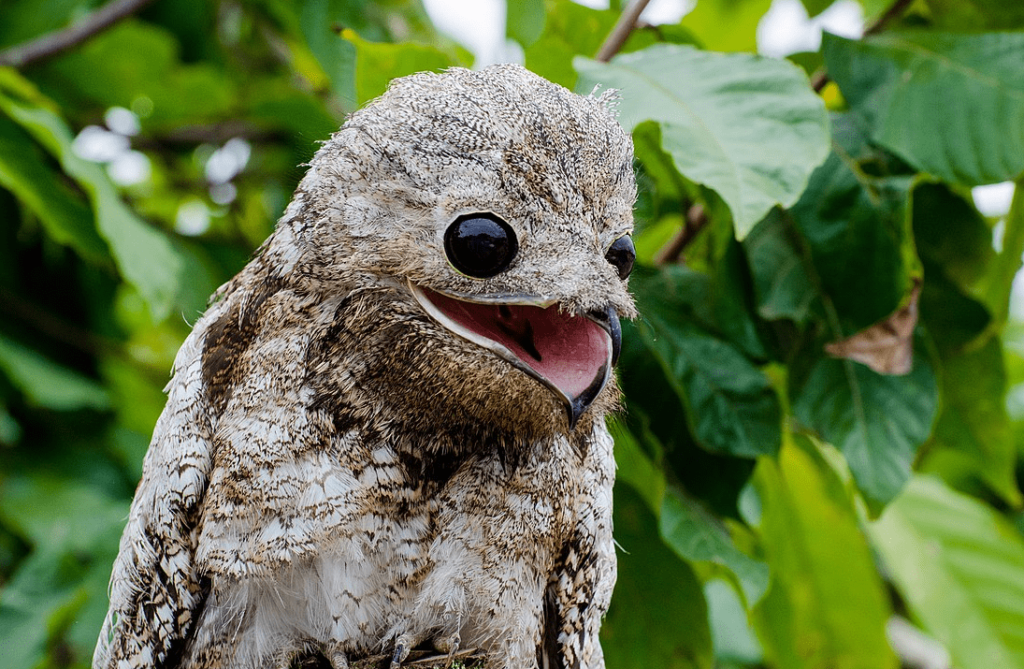 King Vultures are vultures and scavengers that gliding in the air searching for dead animals. The legends say that these large birds were named by the Maya people where the vulture was a “king” that carried messages between humans and the Gods.

These birds King can live anywhere from Mexico south to Argentina. They are very useful to our planet because of its eating habits. They help prevent the spread of diseases. 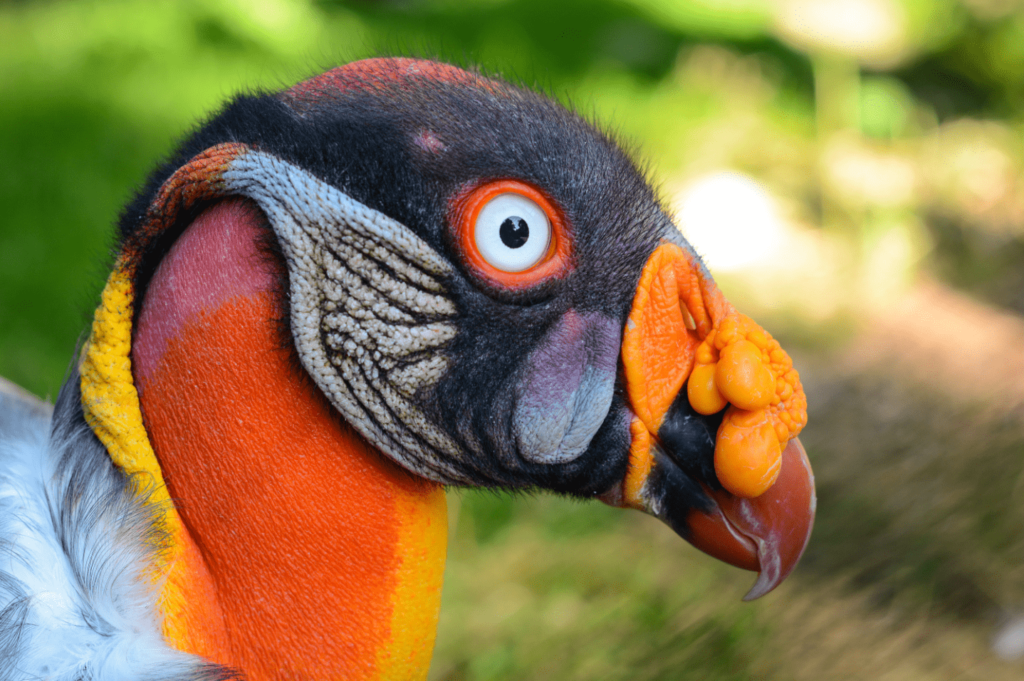 The Golden Pheasant is native to central China. However, you may also find these birds in some other countries like Britain, southwestern Scotland, Spain, and France. Golden Pheasants are known as one of the brightest birds and famous for their very long tail. It is interesting that the females can lay 9 to 11 eggs that hatch after 3 weeks.

The Golden Pheasant is the symbol of good luck, prosperity, and good fortune. This bird is additionally good at sensing unusual dangers and threats. 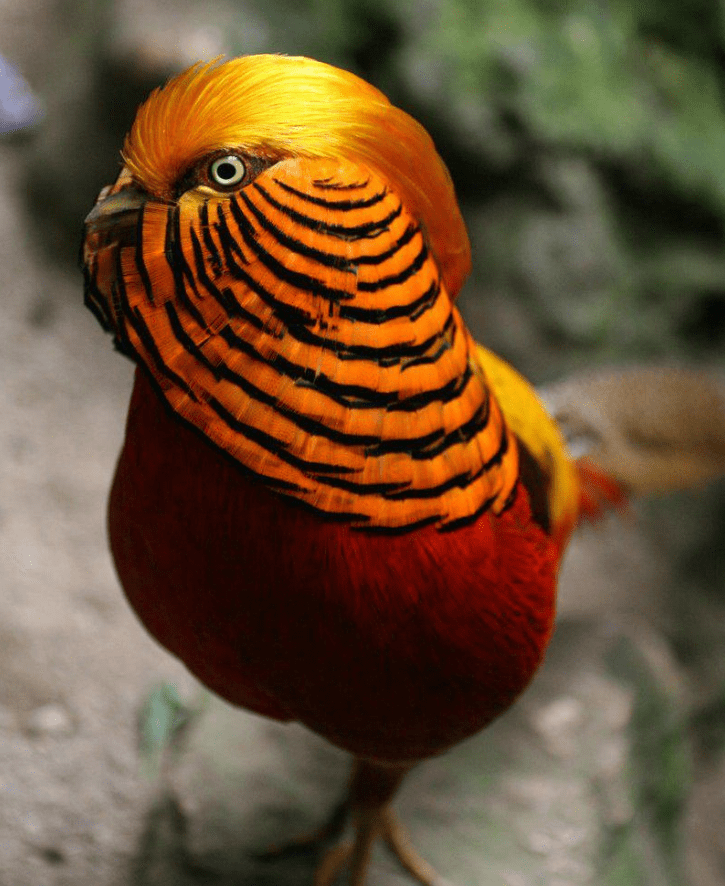 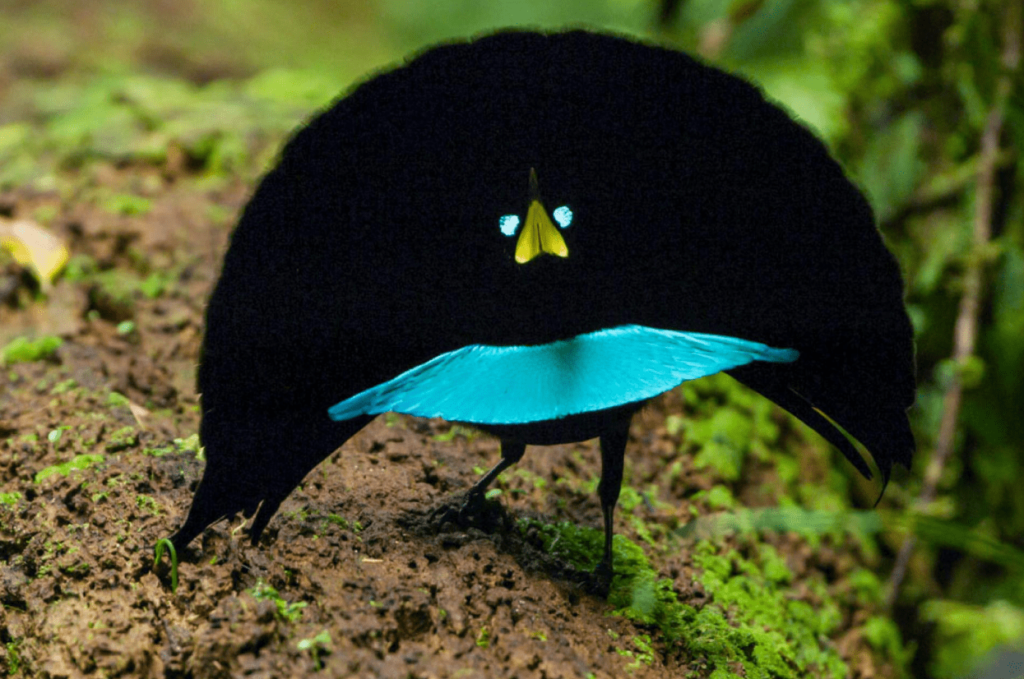 Superb bird-of-paradise is a very small bird, approximately 10 in long. These birds can mesmerize humans with their dancing and their unusual appearance.

They were named as a “new” species because they behave very differently from other birds. They have different courtship dances and vocalizations. The female’s appearance and shape are even different from the males. 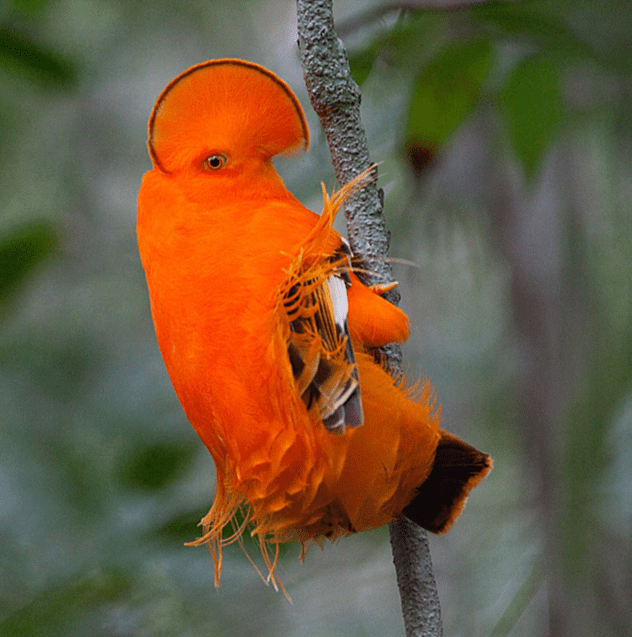 The Cock-of-the-Rock is endemic to South America, living in tropical and subtropical rocky areas. The males of this bird are famous for the prominent fan-shaped crests that they need to attract females.

The males will perform colorful plumage and make various mating calls when it comes to mating. After that, the female herself makes herself a nest in a rocky area, and cares for the eggs. 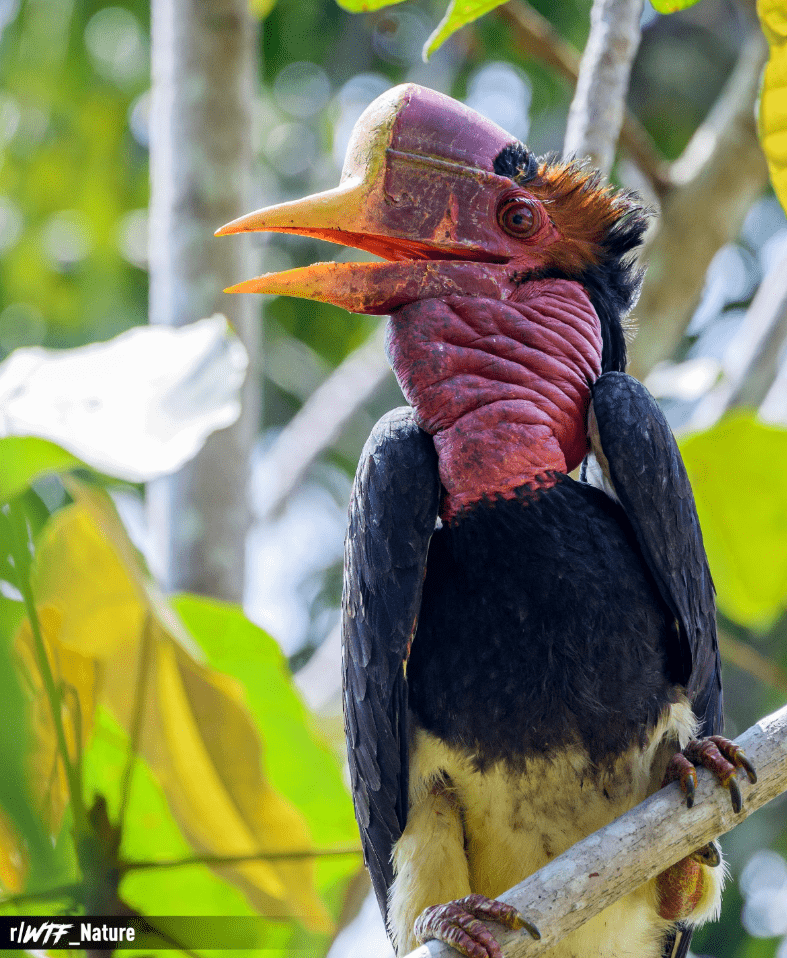 Hornbills are omnivorous. These birds can eat fruit, insects, and even small animals. Hornbills have short tongues, so they can’t swallow food. Instead, these birds toss it to the back of their throat with a head jerk.

Hornbills are from 1 ft to 3’11″ large. They are known for 2 specific features. One is their eyelashes. The other is their strong neck muscles that make their neck thicker than that of the average bird. 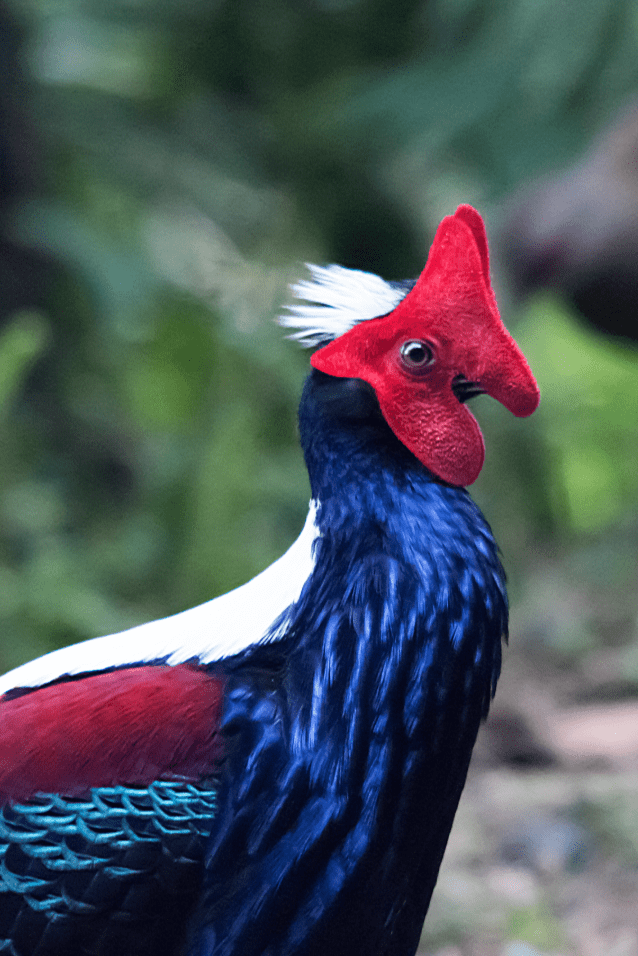 Swinhoe’s pheasant has a very small population these days due to habitat degradation. These pheasants are famous for their blue-purple chest, white nape, red wattles, and white tail and crest, making them bright. 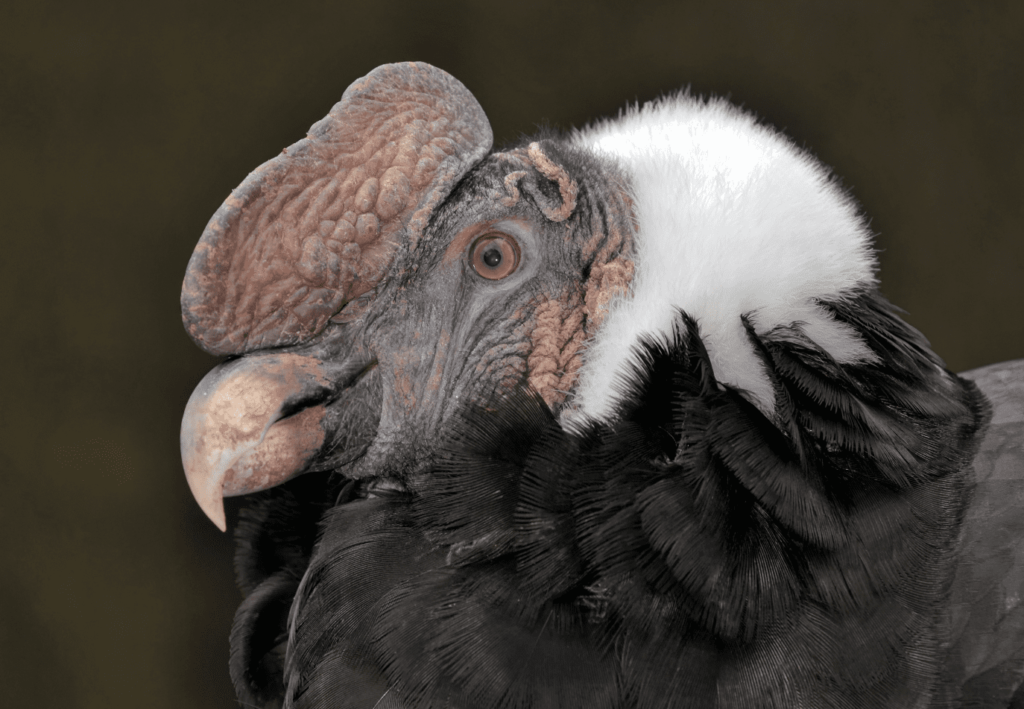 The Andean Condor is famous for its wingspan, over 10 ft long. This stunning bird is also considered the largest flying bird in the world, reaching up to 15 kg heavy and 1.2 m high.

Andean Condors are also the largest Raptor in the entire world. It is interesting that the females only produce one egg every 2 years and the incubation period lasts 54-58 days. 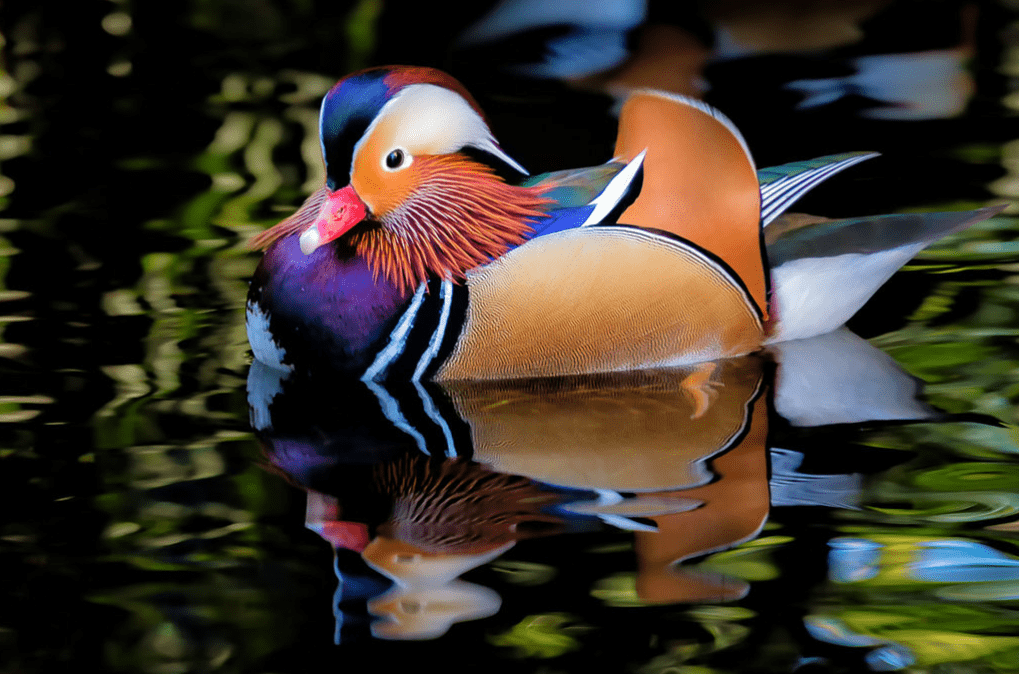 The Mandarin Duck is endemic to China and Japan. They are widely considered the world’s most beautiful duck.

Like most of the ducks, Mandarin ducks seek their mate for the season and form new pairs again in the autumn. It’s interesting that the females don’t quack. Instead, they make clucking calls when seeing and feeling danger. 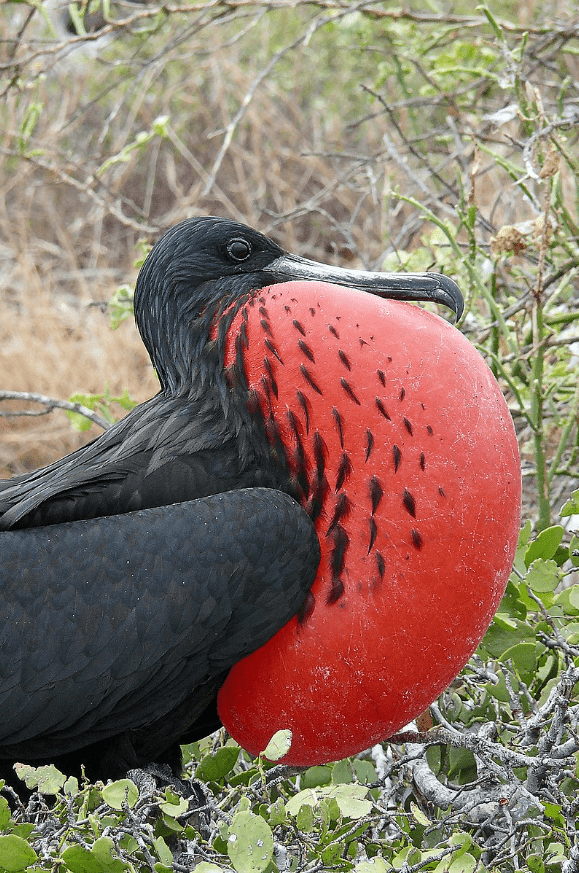 As their name may suggest, Christmas frigatebirds are native to Christmas Island in the Indian Ocean. People call them pirates as these birds steal food from other birds.

Normally, Christmas frigatebirds live with their mates. The males have a red throat sac that they display to get a mate.