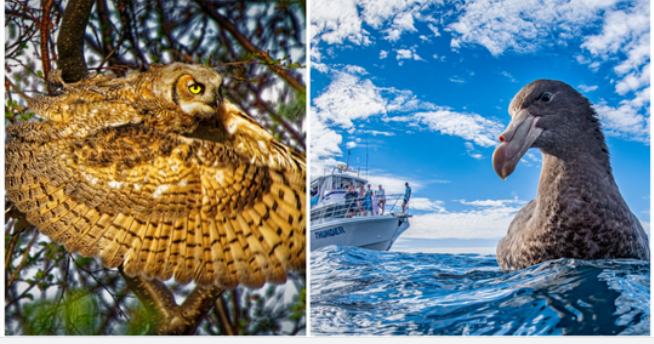 The World Nature Photography Awards were founded in the belief that we can all make small efforts to shape the future of our planet in a positive way and that photography can influence people to see the world from a different perspective and change their own habits for the good of the planet.

2020’s competition saw entries come in from 20 countries across 6 continents. Since the whole world was going through a pandemic, travel was restricted in most of the countries, forcing these photographers to capture these images closer to home. Nonetheless, the results are amazing.

The top award and cash prize of $1000 went to Thomas Vijayan from Canada for his image of the endangered Bornean orangutan. Vijayan spent hours up a tree, waiting to see if one of the local orangutans would use it to cross over to a nearby island. “I had this frame in my mind so, to get this shot, I firstly selected a tree that was in the water so that I could get a good reflection of the sky which makes the image look upside down. Then, I climbed up the tree and waited for hours. This is a regular path for the orangutans to cross to another small island, so I felt I was sure to get this frame if I wait patiently. It was a tough task but the end result paid off. Borneo is a photographers’ paradise. I really enjoyed shooting in such an untouched part of the world,” explained the photographer.

“We’ve been thrilled with the quality of work that was entered into the awards. It was such a privilege to see the competition’s philosophy come to life – our photographers really are shining a spotlight on the wonders of the natural world in a way that reminds us to do everything we can to protect the future of our planet,” said Adrian Dinsdale, co-founder of the WNPA.

Upon announcing the winners of the 2020 competition, the team also officially opened a call for entries for this year. Early Bird rates are currently available until 31st March, 2021. To enter, simply visit their Webpage.

Scroll down below to see the incredible winning images.

A white rhino is dehorned in Thanda Safari Game Reserve, South Africa, to avoid being killed by poachers one day.
It is a very invasive measure, but an effective strategy against poaching. I like to call it a conservation measure of last resort. All rhino species are, or have been, on the brink of extinction due to the popularity of their horn in Asia. But to get things right: Rhino horn is composed of keratin, the very same substance that forms our fingernails. Nowadays, it’s widespread known, even in Asia, that rhino horn has no medicinal value or any other beneficial effect. However, the fewer rhinoceroses left in the wild, the higher the price asked for their horn. This has unfortunately made the consumption of rhino horn to develop into a status symbol, i.e., an exclusive product to show off your wealth.

These two weaver ants appear to be exchanging food as I photographed them in the night. The twig they were on was entirely covered in ants with the nest not far away. Ants are well-known for their complex social behaviour which consists of many different chemical signals and antennae movements that they use to communicate with one another.
Though I don’t often photograph ants due to their quick movements and very small size, weaver ants are larger than the average ant and at night they don’t seem to move very much, allowing me to comfortably take several shots. I photographed them not too far from my home in Alam Sutera, Serpong, Indonesia. Weaver ants are indeed quite common where I live. It’s not every day that I get to observe ants behave in such a way, so it certainly makes for a memorable encounter.

Cape buffalo spies over a rampart at a waterhole in Buffaloland, Hoedspruit, South Africa. No bait was used. I captured this photo during my wildlife photography internship in the Greater Kruger Area, South Africa. During this time, we went on several game drives to observe and photograph the animals. On a hot afternoon, we spotted a group of buffalos relaxing in a waterhole next to a big meadow, where more buffalos and zebras were. One of the buffalo was kind of curious and spied several times over a rampart to observe ous. This was the situation which I captured. Being part of of many ecosystems in Sub-Saharan Africa, cape buffalos may be of scientific interest for being prey of lions and nile crocodiles as well as due to their potential declining numbers.

– A Green Crested Lizard (Bronchocela Cristatella) burping in its rest time on a tree’s branch.
– at Windsor Nature Park, Singapore