Baboon Spotted Carrying A Lion Cub Just Like From ‘The Lion King’, But Unfortunately, The Reality Is Not As Happy 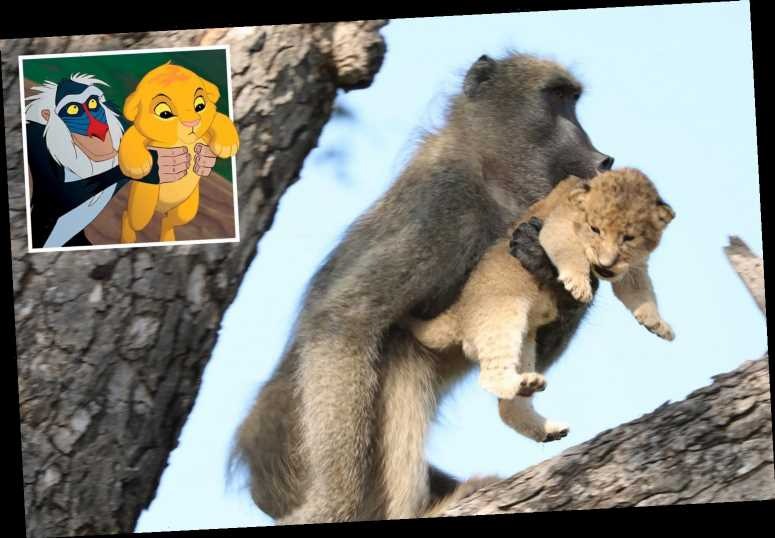 It was just another day for Safari guide Kurt Schultz. He was photographing lions in South Africa’s Kruger National Park on Saturday and everything seemed pretty much normal. However, as he was snapping away, Schultz noticed something reminiscent of the legendary movie The Lion King. A baboon was carrying a small lion cub up a marula tree.

Sadly, Schultz couldn’t enjoy the re-enactment of the Disney classic. He feared the primate could drop the little critter. Or even worse, ‘viciously kill’ the poor animal. He has repeatedly witnessed cubs fall victim to groups of baboons. 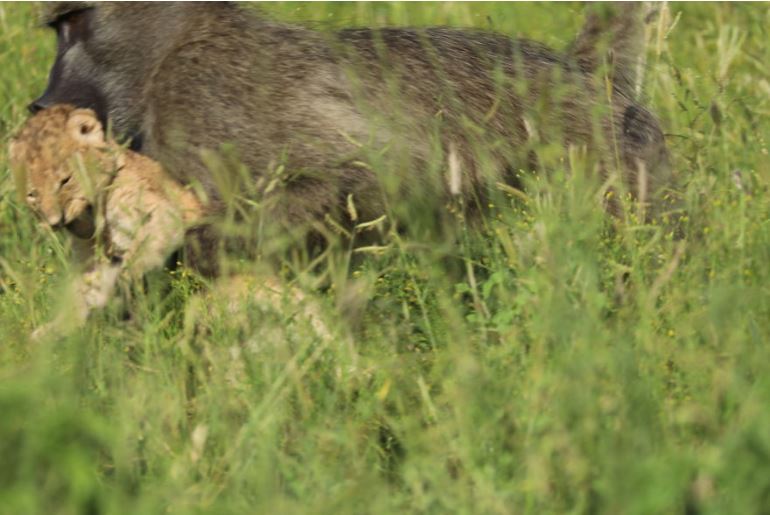 “I went to an area very active with lion sightings recently and came upon a troop of baboons really
excited and playful this is normal for early mornings,” Schultz told Bored Panda. “There was another vehicle at the baboon sighting and it was mentioned there’s possibly a lion cub amongst the baboon troop.”

“After waiting for a long period we noticed the one baboon that first seemed to be a female carrying a lion cub I thought was dead. This area has large granite hills and boulders on it and is known for lions and leopards hiding their newborn cubs in this region and amongst the koppies in the past.” 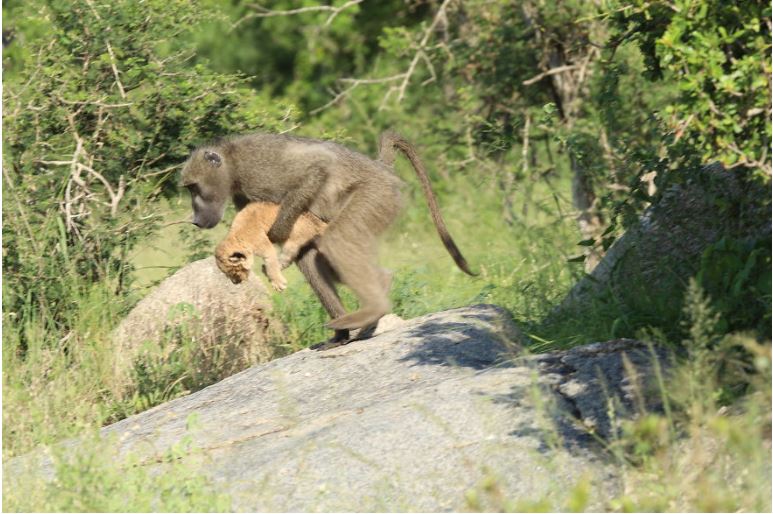 “The young baboon crossed the road and climbed up a marula tree. I waited for about 30 minutes before it came into view and was moving from tree to tree, the rest of the troop then moved away and the baboon was grooming and caring for the lion cub as if this was a young baboon,” he explained. 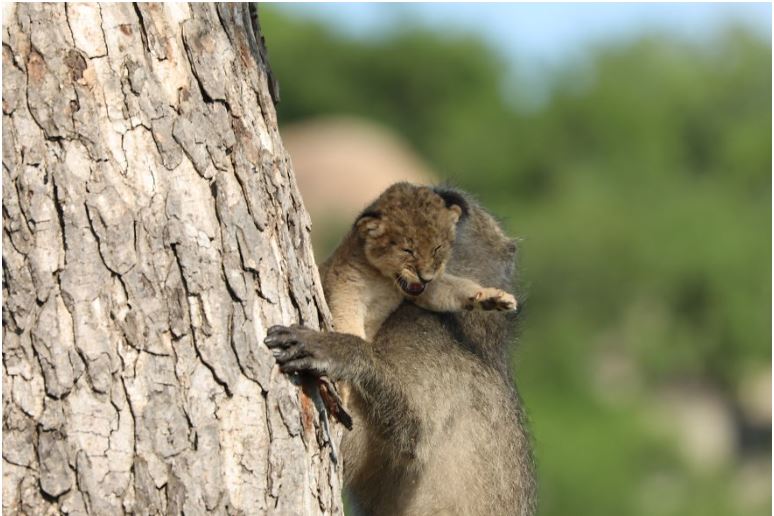 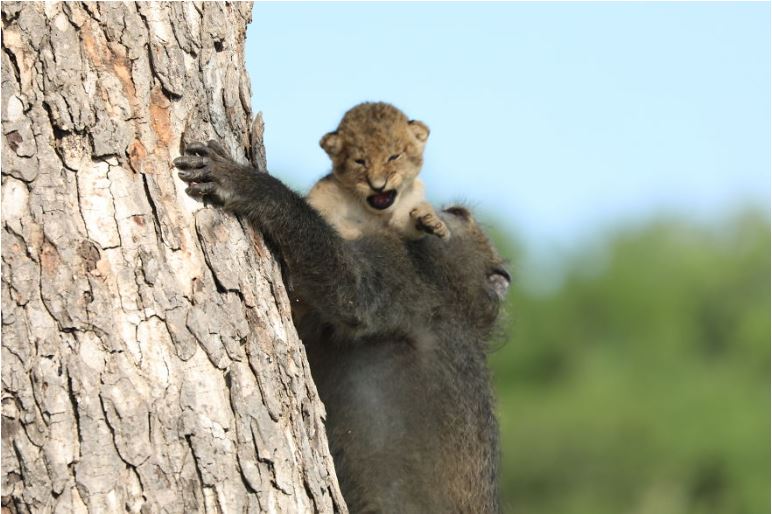 “The baboon was grooming the little lion cub as if it was a baby baboon… The males do a lot of grooming but the care given… was the same care given by a female to one of her own young.” 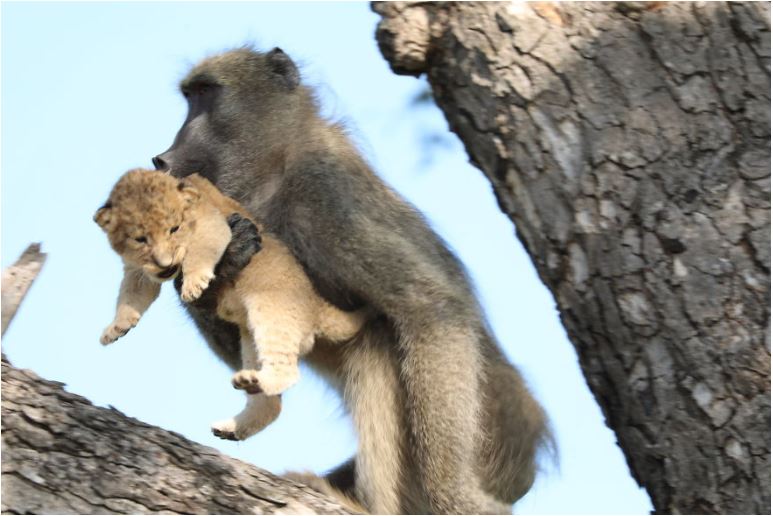 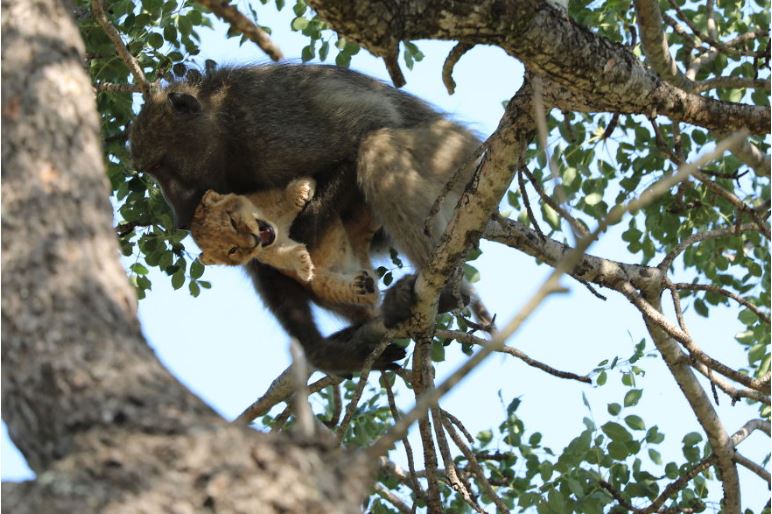 “In 20 years of guiding southern and east Africa, I have witnessed baboons viciously killing leopard cubs and have heard of baboons killing lion cubs. But I have never seen the care and attention given to a lion cub in this manner.”

Schultz doesn’t see a chance of this poor cub surviving. Mainly because the baboons were large and a lion would not be able to get the young back. “Nature is cruel at most times and the survival of young predator cubs is not easy,” he said. “The lion cubs pose a threat to the baboons when they get older.”

The guide thinks this will remain one of his most interesting sightings. And even though Schultz cares for the little lion and wishes it to grow up and live a free life, he also knows that nature has its own ways. “We cannot get involved and we need to keep Kruger simple and wild, these were the wishes of Stevenson Hamilton.” 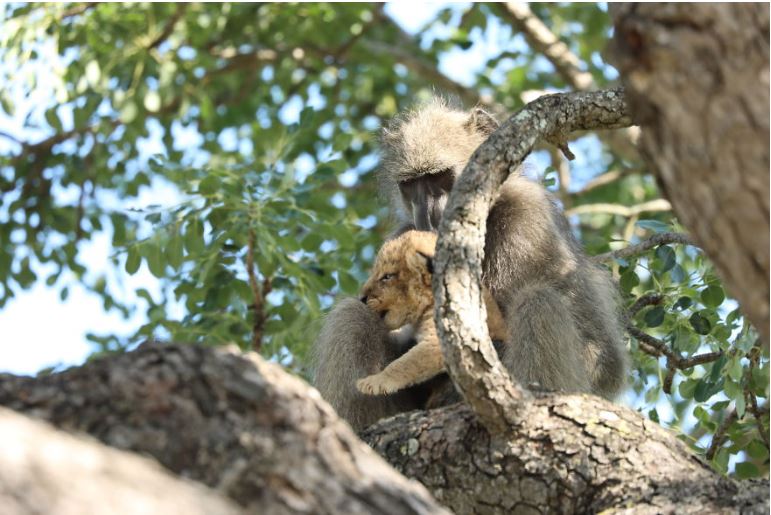 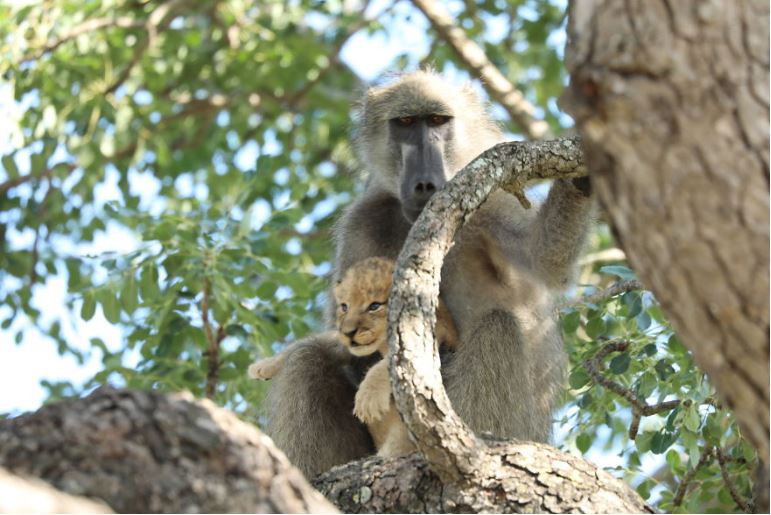 Schultz was fast enough to catch the surprising moment on camera. And even though the photographs look like they’re portraying a cute bond between the two animals, Schultz believes the situation most likely didn’t end well for the cub.
The guide eventually moved on to allow tourists to get a look at the scene, and later the primates took the cub away with them. 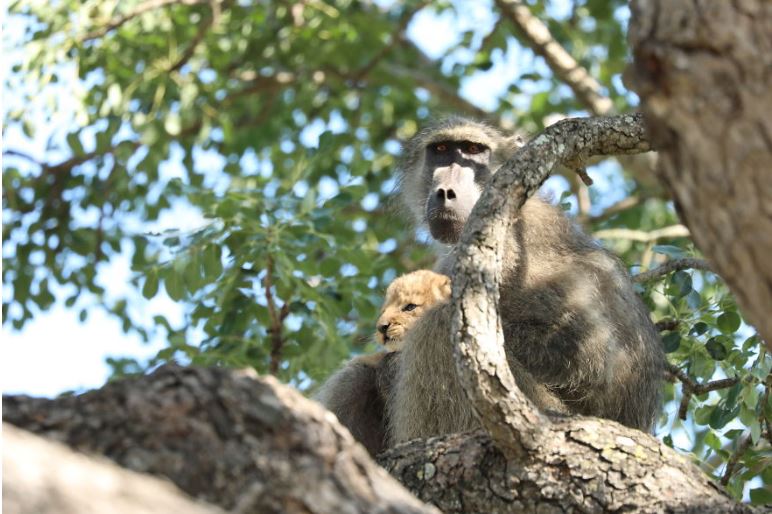 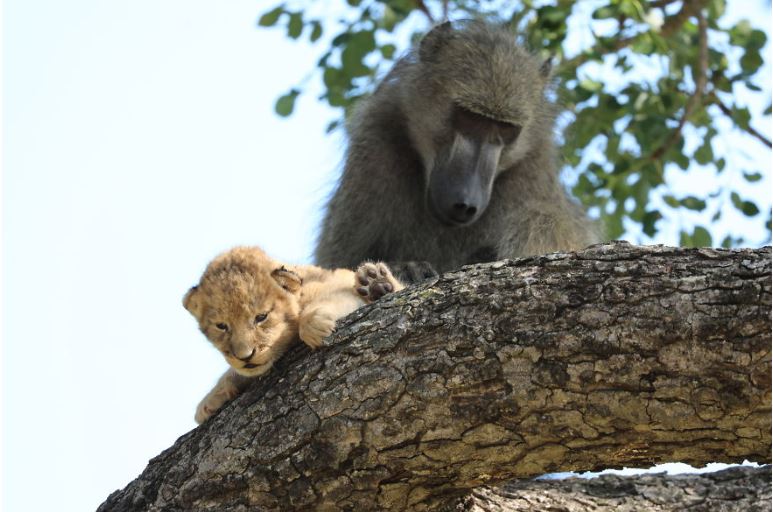 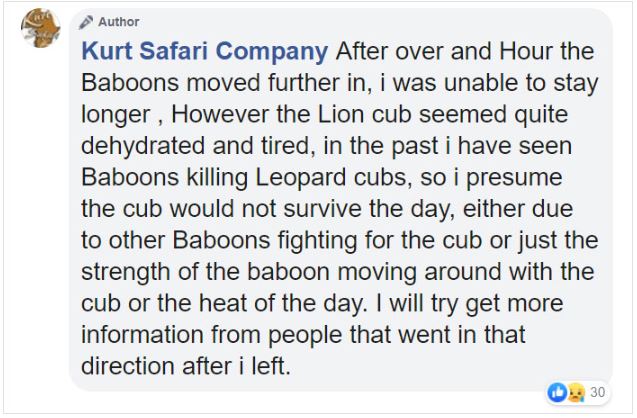 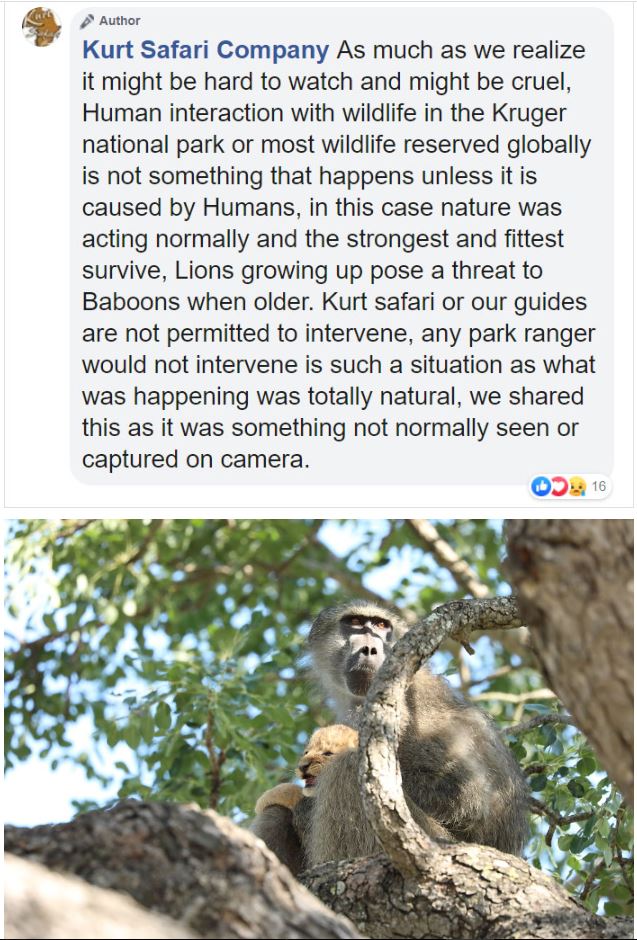 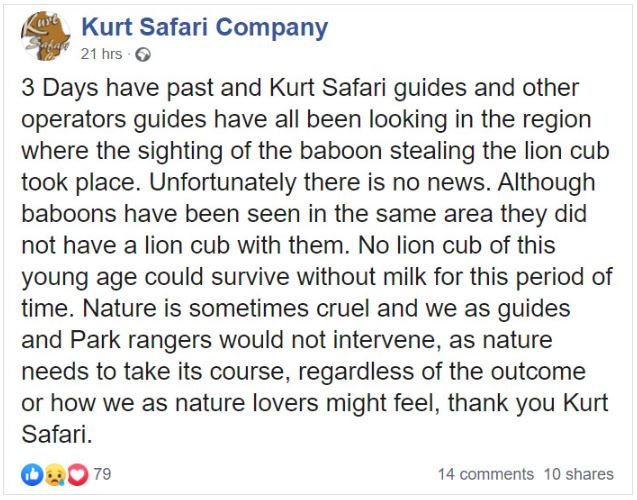 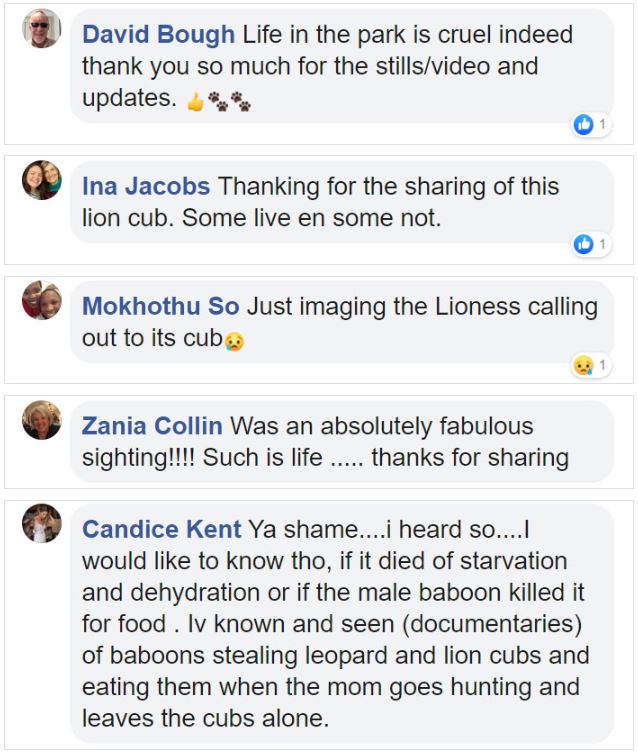