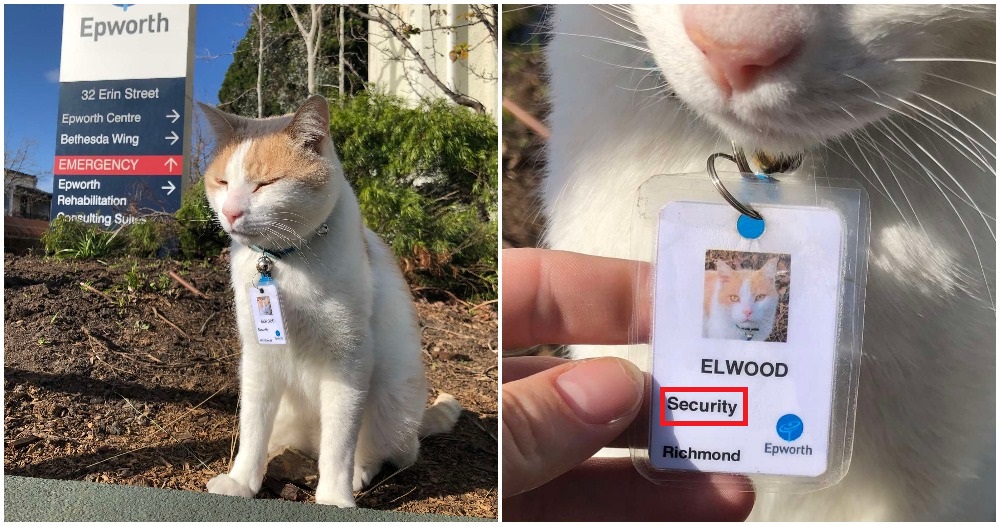 This catto in Australia is hard at work!

This catto is named Elwood. He’s a security guard at the Epworth Healthcare hospital in Richmond, Australia. No one knew who he was and what he did before this, but the only thing everyone knows is that Elwood takes his job very seriously.

His human colleague, Chantel Trollip recounted that she met him a year ago in front of the hospital. She told The Dodo,

“He’s usually either securing the front door waiting for pats or lounging in the bushes nearby soaking up the sun.”

No one really questioned his existence, soon, Elwood became part of the staff at the hospital. He was then given an employee ID badge which was then attached to his collar. Chantel said,

“He’s got his own ID badge which is identical to our actual staff badges, down to the call codes on the back.”

As part of the permanent staff now, Elwood is working harder than ever. He’ll stop when the people give him pats and head rubs but he wouldn’t stay for long as he needs to patrol the hospital area. Chantel tells My Modern Met that although Elwood might be of small stature, he has one lethal weapon which is his sweet face.

“I think any potential criminals are thwarted by his sweetness when passersby see him.”

Elwood is such a cute, responsible catto! We wish him nothing but the best in his life and also career!