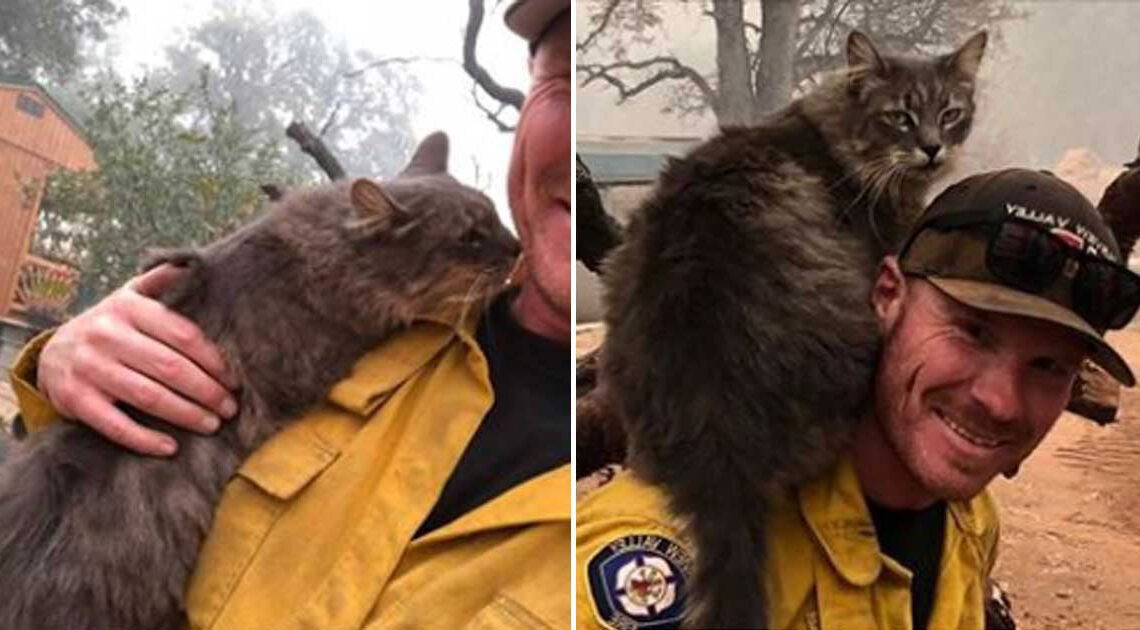 Ryan Coleman gained an unexpected new bestie while fighting the raging fires that overtook Paradise, California this last November after the firefighter rescued a cat from the blazing inferno. Deemed the deadliest fire to ever occur in the sunny state’s history, and the 6th most fatal in the entire U.S., the Paradise fire laid waste to 86 victims plus another 3 people unaccounted for and destroyed over 14,000 homes. With all of the destruction and death surrounding him, a ray of hope broke through the wasteland for the firefighter in the form of a distressed grey cat. 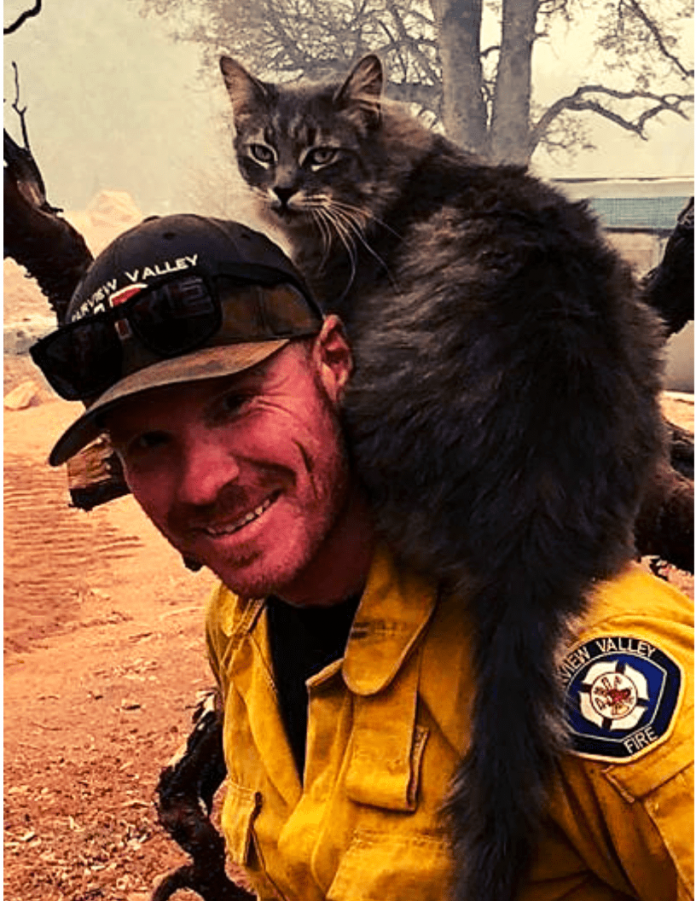 The fire began on November 8th and tore through Butte County, CA for a total of 17 days before firefighters were able to get it 100% contained, and most of the damage occurred within just the first six hours. When Coleman was poking through the debris and wreckage in the newly burned wasteland, a big fluffy cat wasted no time in coming up to greet him. With so many homes lost to the raging fires, thousands of pets, livestock, and wildlife were abandoned, lost, or worse. So, when this gray fluff-ball came tromping out to Coleman, the sight was definitely a welcome one. 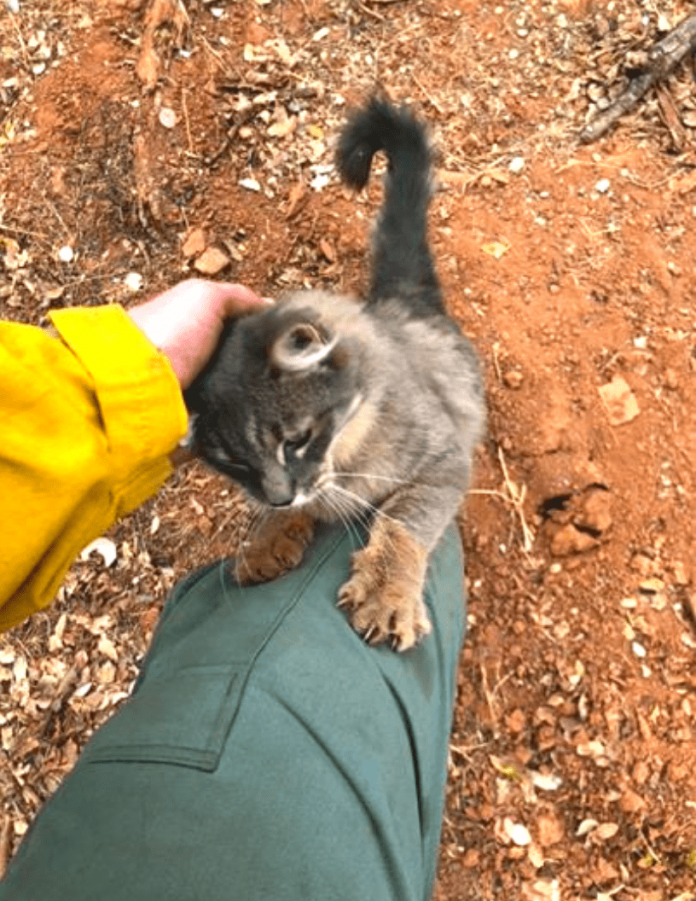 The firefighter was quick to pull out his phone and snap an adorable picture of the cat who seemed eager to greet him. Coleman was probably the first person this poor cat had seen since the terrifying fire began, and it’s amazing to see him unsigned by the heat of the blaze like so many other poor critters.

It wasn’t enough for the cat to be close to him or rub against his leg. Clearly, the cat knew that Ryan would keep him safe because he ran right up to him and then right up his leg. Ryan was his human now, at least for the foreseeable future, and he wasn’t letting him go anywhere without him 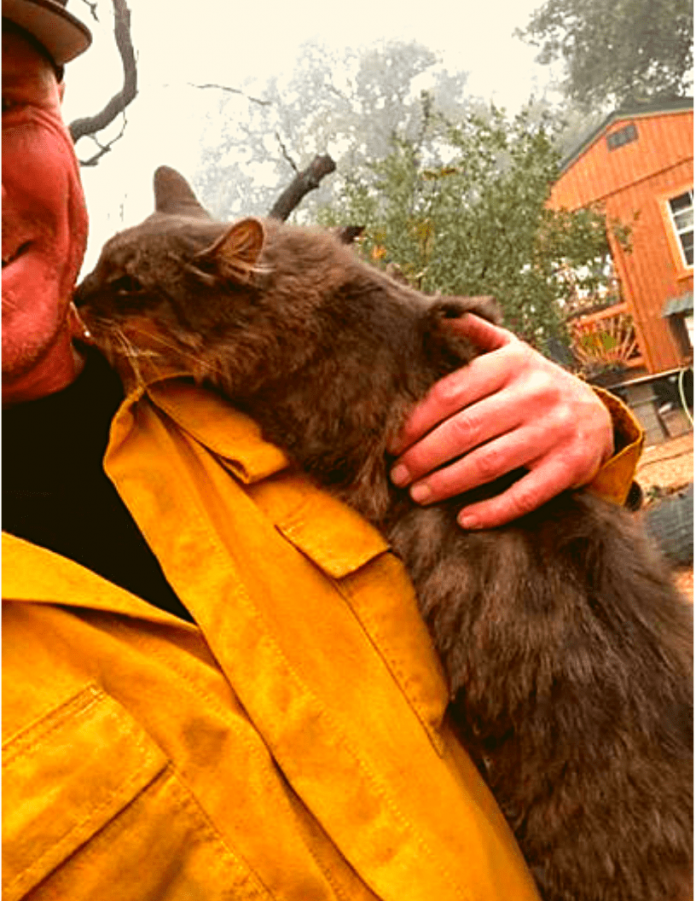 Coleman tried hugging the cat to his chest as he snapped another quick selfie with him, but the frenzied furbaby wasn’t content there either. The cat wanted to be aloft the firefighter’s strong shoulders, where he could be near him and know that he was out of harm’s way, and a good-hearted Ryan happily obliged! Ryan took a quick video and posted it, along with the pictures, to his Facebook page on November 18th with a caption that read:

“Kitty rescue. She just chilled on my neck and shoulders as I’d walk around.”

With the way the fires continued to grow and rage, it’s no wonder this cat was adopting Ryan on site! Along with pictures of his new BFF, the courageous firefighter also posted pictures of what it was like, being in the midst of what could only be described as a hellish catastrophe. 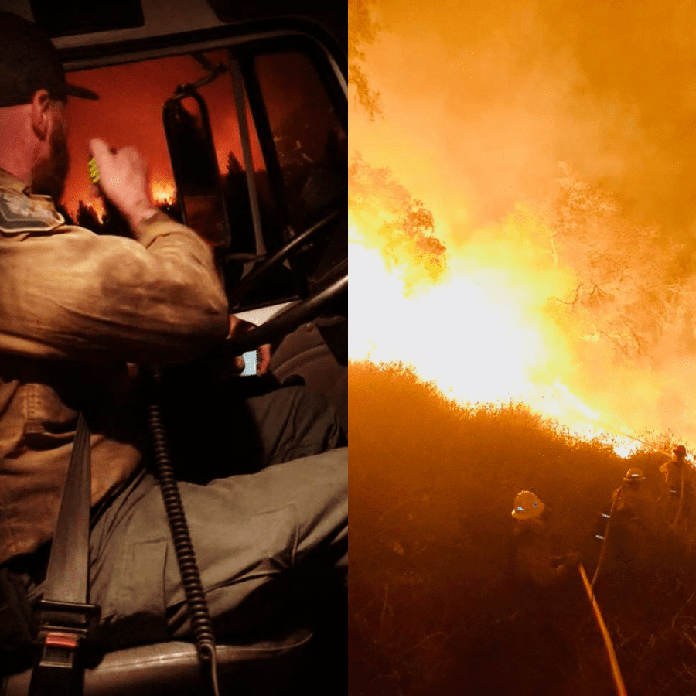 Exhausted as Coleman, who is an engine Captain, must have been after battling the wildfires for several days, he was more than happy to have the love and companionship of the cat on his shoulders. She didn’t just settle down once perched there, either.

In the video below you can see the eager kitty doing everything she can to thank her rescuer.

As she rides on his shoulders, she keeps pressing her head against his face and rubbing back and forth over his stubbly beard, not to be deterred from showering him with affection.

In a wildfire deemed to be the most destructive in our country’s history, as well as one of the deadliest, it’s beautiful to see our heroes like this firefighter get the love and gratitude they deserve, even and especially from non-humans who would have been lost without them. If you or someone you know has lost track of a pet during the Paradise Camp Fire, check here to see if they are being held at the shelter as employees and volunteers search for their humans.