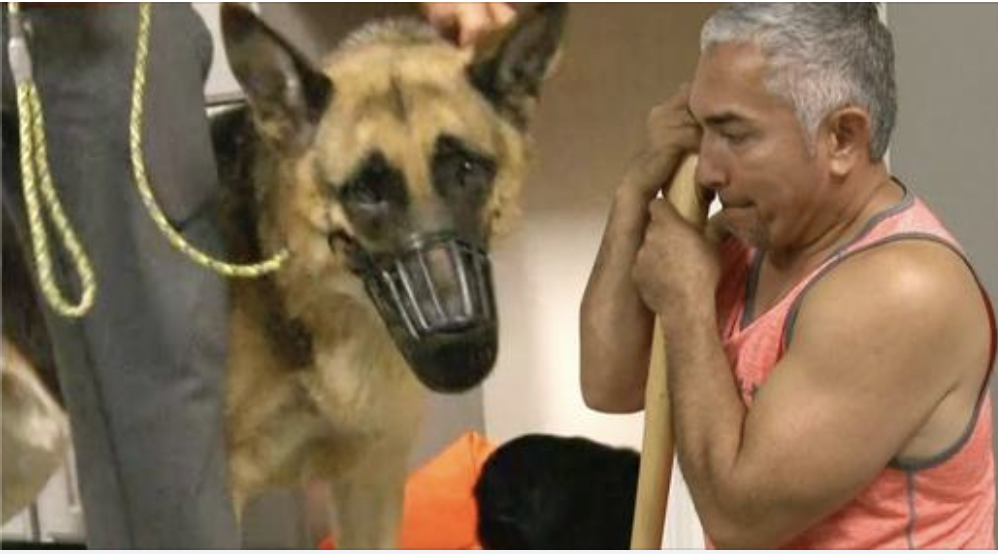 It’s amazing what a little love and understanding can do.

Cesar Millan has made himself a household name for his work with dogs. We’re talking difficult dogs. Dogs that have owners on the verge of giving up if not for Millan and his work.

And he’s worked with all kinds of dogs. Nothing is too difficult for the Mexican-American dog trainer. Millan’s got over 25 years of experience so his resume speaks for itself. The dog is as adorable and handsome as GSD’s come except Ovechkin can get overly aggressive. He is territorial and protective of his owner, and that’s great for sure, but it’s become borderline dangerous. The dog’s owner, Trish, calls in Millan for help. He arrives but getting to Ovechkin required two tense standoffs that could have turned ugly had it not been for Millan’s expertise.

The dog whisperer finally gets the GSD under control and takes the dog to his own house for some one-on-one. It’s not an easy job, but someone’s got to do it.

Millan’s approach to working with dogs is the “calm-assertive energy”. And with all the dogs he’s helped, it seems to be doing the trick. Even Ovechkin here is about to find out.

The dog wears a muzzle first but Millan removes it, allwoing Ovechkin to explore the new area. It’s not the dog’s territory making Ovechkin more curious and timid than anything. “He’s amazing. If I needed help with a dog I would pay whatever he ask for. He’s truly part dog. Just amazing. I love animals so much and it’s so great to have someone like him around to help dogs that are having problems through no fault of their own.” says a viewer named Paul Sam. The GSD walks around, sniffing here and there before sitting down in the company of another dog.

Millan is biding his time, as he needs the dog to surrender to him so he can start the rehabilitation process. Even Millan is there, standing calmly showing Ovechkin who the boss is. He uses a walking stick for certain gestures while the dog stays in a corner. No unnecessary movements here, just the ones Millan needs to communicate with the aggressive dog.

Millan takes Ovechkin to a field where his staff is waiting to help him work with the dog. The staff forms a circle, holding Tupperwares of food that Ovechkin can sniff but can’t touch. The dog isn’t allowed to break the circle and enter either. “Geez. Amazing! Thank you for all the work you do in trying to save these dogs. I believe an animal is never born angry or mean. They are taught that way or treated very badly to be that way. It’s the same with humans also. To see you change this beautiful German Shepherd and mellow him out is magic! Love it!” says another viewer.

You have to see how Millan works with Ovechkin. It’s a huge transformation from the once aggressive dog.