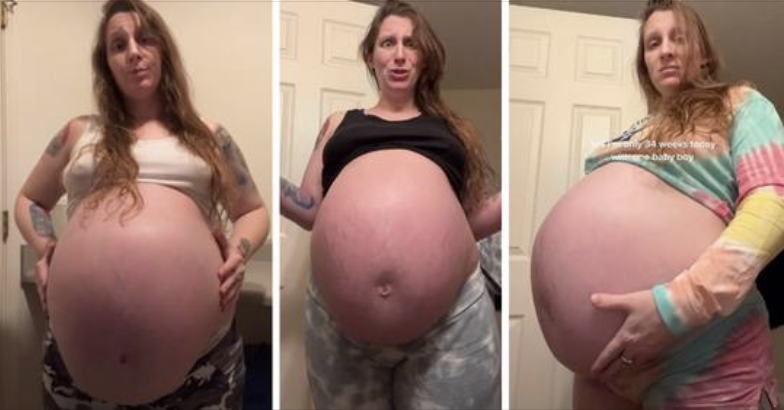 If you ask me, pregnant bellies are the most beautiful bellies of them all.

Most parents-to-be take pictures of the mom’s growing tummy so that they never forget the time that they were anxiously expecting the newest addition to their family.

But when TikToker Renae W decided to share her pregnancy story – and her massive belly – on social media, she was met with skepticism and a doctor who began to question her.

But in the end, Renae would silence all doubters when it was time for her to deliver… 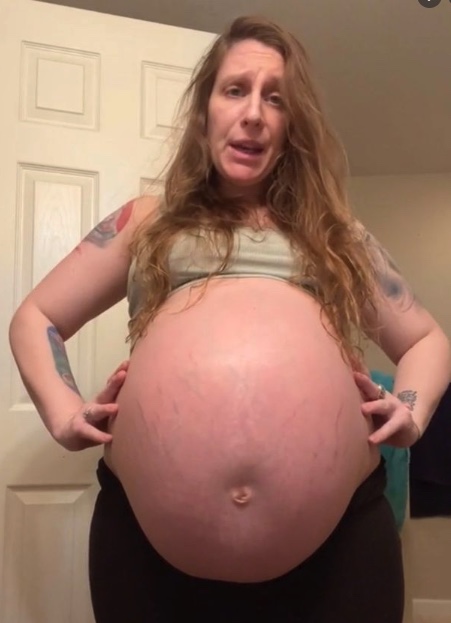 All mothers can undoubtedly testify to the incredible, albeit a bit scary, feeling that comes with sensing their baby’s movements in their belly.

Pregnancy can affect all women differently. Some can lay bedridden for days on end, unable to keep meals down. Others, meanwhile, can be more active and productive than ever before.

When mother Renae W from the U.S. became pregnant for the sixth time in her life, she was very active, and started posting pictures of her pregnant tummy on the social networking platform TikTok.

Renae initially posted videos about her recovery and journey towards a sober life, but she shifted focus after she became pregnant. 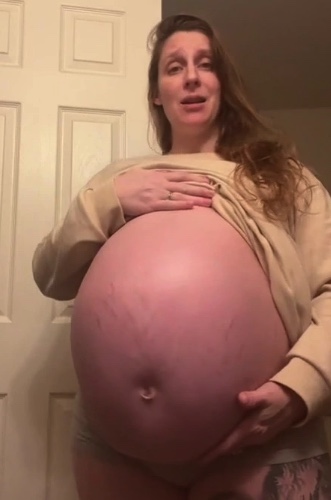 One of the reasons she got so much attention, and soon amassed a large following, was her giant belly.

The first videos she published didn’t get that much engagement, but as time went on and her belly continued to grow, Renae began to get millions of video views on her channel. Many were convinced that she had an army of children in her womb – some speculated that she might be carrying as many as eight babies.

For her part, Renae was sure that there was only one baby in her womb. 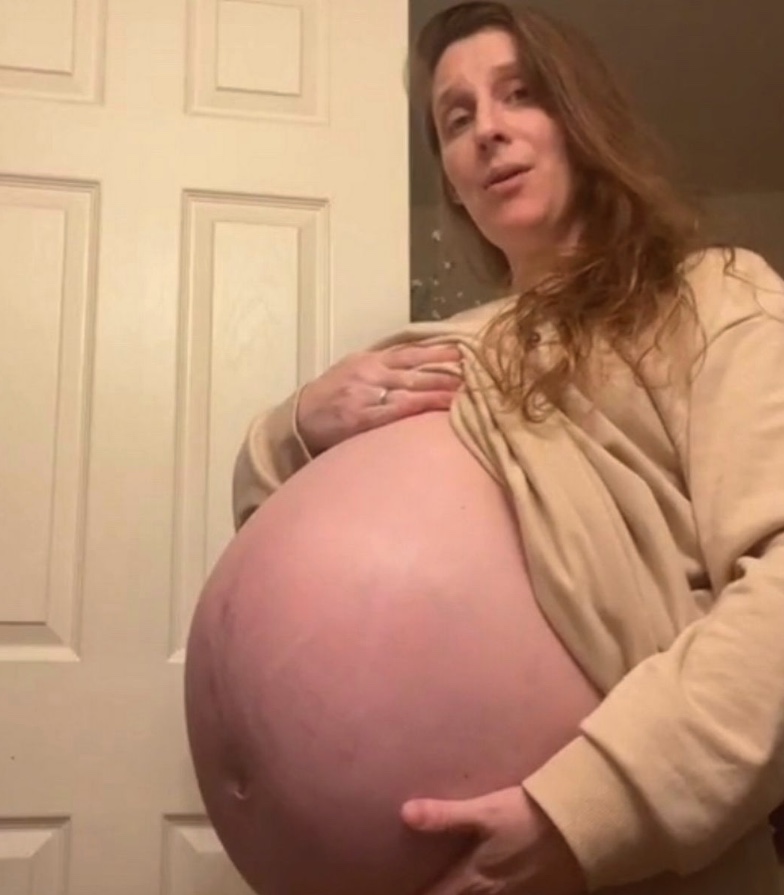 The mother of four gave no medical explanation for her giant stomach –which led to even more rumors and theories. Previously on Newsner, we’ve seen cases where polyhydramnios, extra fluid, or gestational diabetes can be the cause of an extra large baby bump. According to Renae, though, despite people’s comments and what doctors thought, everything was normal.

“I had an ultrasound not that long ago, fluid is normal, baby is measuring a week and four days ahead,” she said.

Still, some people could not help but comment – they felt a need to criticize the mother. One doctor, who one would assume is supposed to be supportive, expressed concern for Renae. The medical expert was obviously quite shocked when seeing pictures of her belly, and said that the mother-to-be should be worried. 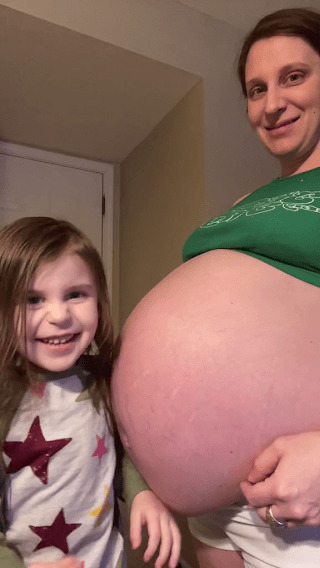 Renae, who suffered a miscarriage before falling pregnant again, felt that she had to reply and address that comment in particular. She felt as though the doctor commenting that her belly shouldn’t be that big, despite the fact she and her baby were healthy, was too far.

”As a doctor, you should be ashamed of yourself for this video, especially when I’m not your patient,” she wrote.

According to Renae, her short height made her stomach look bigger than it actually was. 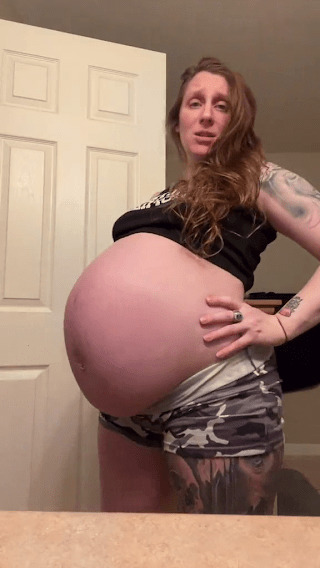 When she gave birth to another son a few years ago, he weighed 9lb and 6oz. Despite this, Renae’s followers could hardly believe that there was only one baby inside that gigantic belly of hers. Many were left lost for words.

One wrote: ”I swear you have like 4 twins in there.“

Another user said: “There’s a full grown adult in there.“ 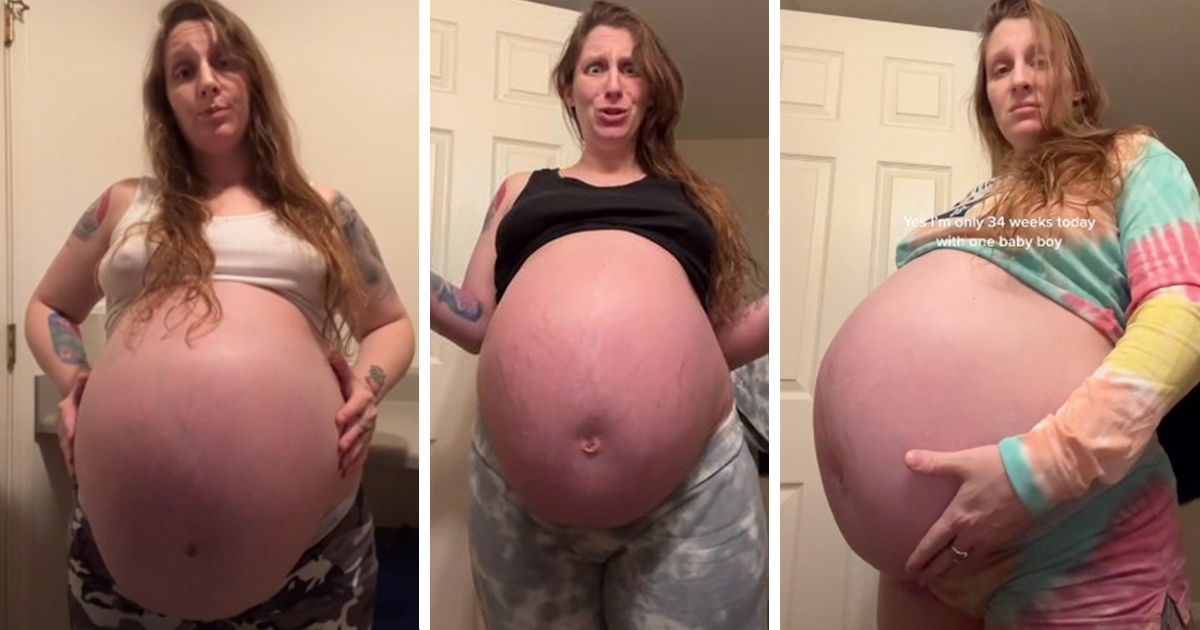 During her well-documented pregnancy, she gained 35 pounds. Viewers got to watch as her belly expanded bit by bit. When Renae uploaded a video at 37-weeks pregnant, it ended up getting a whopping 37 million views. Fortunately, some people stepped up and defended the mother.

Another added: “I can’t believe he would even say that to you knowing absolutely nothing about your pregnancy.” 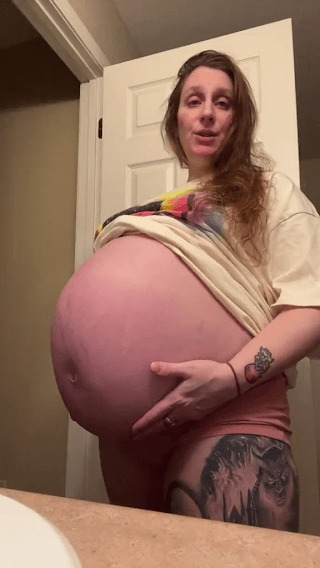 On February 18, it was time to silence those who refused to believe that Renae was carrying just one baby. She gave birth to her big boy via a scheduled C-section.

The newborn baby weighed 9lb 8oz and was 22 & 1/2 inches tall. According to Renae, her son also inherited a “big head” from his dad, measuring 15 inches around. Most important of all though, her baby boy came into the world healthy.

“When your son comes out hand first looking like Superman flying,” she wrote in February. “Yeah I said son, just one big healthy baby boy.” 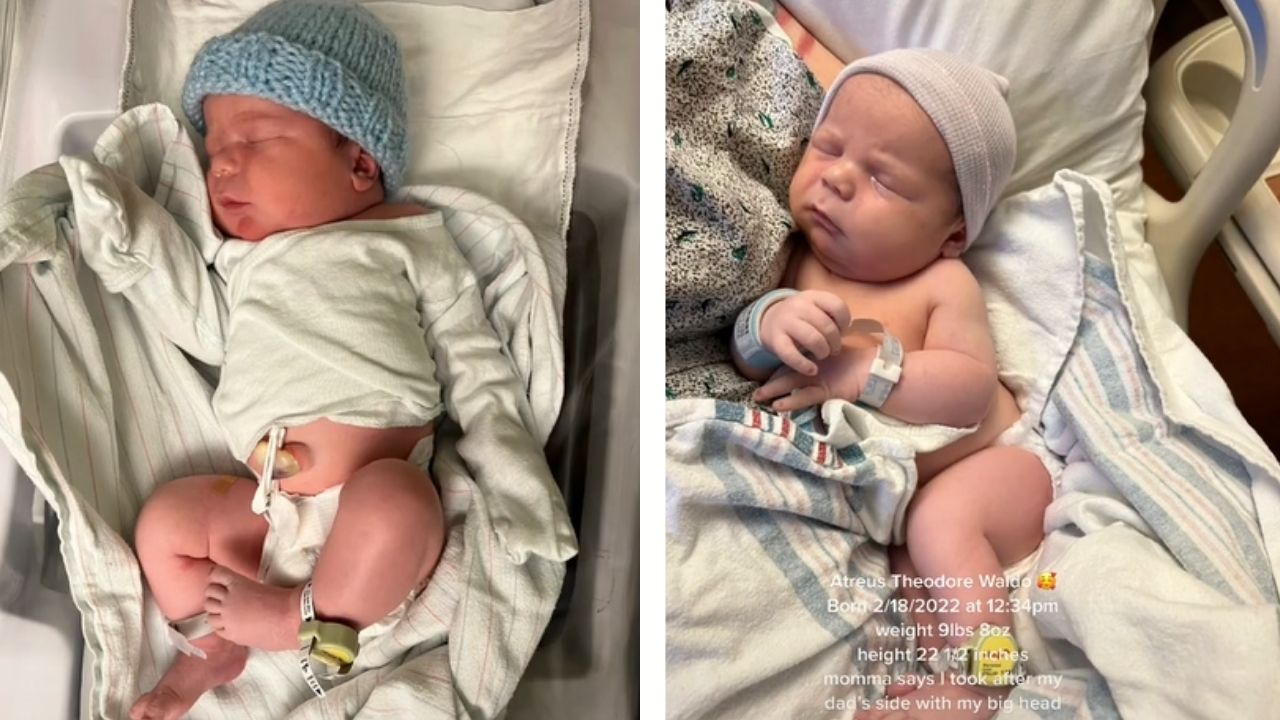 Although her big belly caused some problems and complications in Renae’s life, she came to miss the baby bump once her son was born. It felt ”weird” not having her bump anymore, the mother said.

Her followers were also curious about her stomach after the birth. Eleven weeks after her C-section, Renae showed off her belly and responded to the critical voices that reappeared in her comments.

“Five days after my c-section. The only weight I lost was my 9lb 8oz baby and another 5 and a half pounds,” she said.

“I don’t get why people don’t understand that everyone carries different. I’m short and carry all out front. I’ve been told you ruined your body, and ‘your stretch marks are gonna be so bad afterwards’. The truth is I don’t care because my body blessed me with five amazing kids and an angel baby. I love my body and the amazing things it has done.” 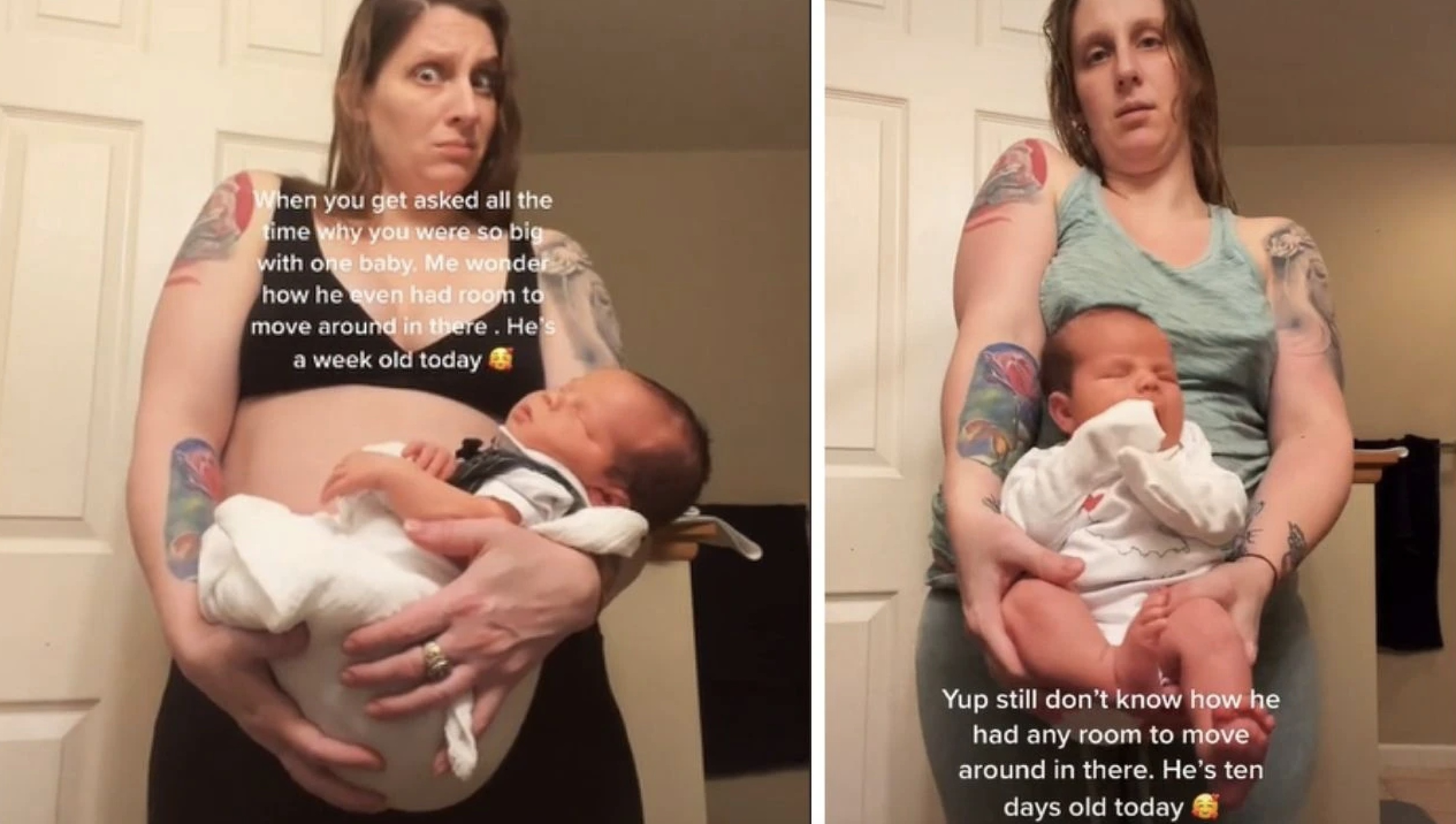 To show the size of her baby, Renae published videos of her holding her precious baby in her arms.

“When you get asked all the time why you were so big with one baby. Me wondering how he even had room to move around in there,” she wrote.

♬ I Took a Nap – gunnarolla

Fast-forward to today; we can see that Renae continues to update her fans on TikTok, and by all accounts, things are going well for her and the family.

Of course, having a newborn has its challenges, and they also apply to Renae – but her boy is growing so fast, and Renae is still sober, so that’s fantastic! We wish her all the luck in the future!