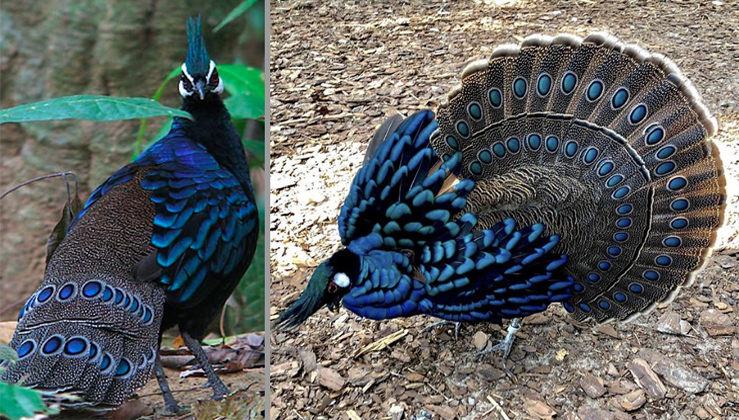 The Palawan peacock-pheasant (Polyplectron napoleonis) is an outstanding bird. It has iridescent blue-green plumage and Mohawk, making them conspicuous whenever they are. The black underparts and white stripes above (and below) the eyes also create more charm for this creature.

This bird’s peacock-like tail with characteristic patterns is eye-catching, too. Unlike male birds with stunning features above, female Palawan peacock-pheasants are a dull grey-brown color. This beautiful bird species is native to the island of Palawan in the southern Philippines. It is known from c.20 localities throughout the island, with records from at least 11 since 1980. Local reports suggest that it has a wider distribution. In the early 1970s, despite local extinctions, it was not considered particularly rare. In 1995, its fragmented population was estimated to number fewer than 10,000 mature individuals (McGowan and Garson 1995); however, more recent density estimates from Puerto Princesa Subterranean River National Park (Mallari et al. 2011) suggest that this was an underestimate. As a result of the latest density estimates (Mallari et al. 2011), the population is conservatively estimated at fewer than 50,000 mature individuals. The species, however, is still thought to be declining. 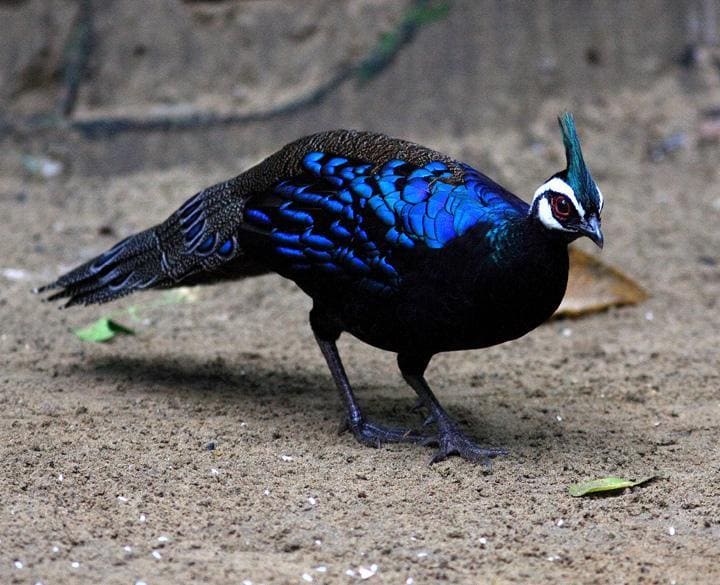 They live on the ground and prefer dense vegetation. Despite evidence that its population may be larger than previously estimated, this species still qualifies as Vulnerable because it is suspected to be undergoing a rapid decline as a result of habitat destruction, hunting and capture for trade. Palawan peacock-pheasants feed on seeds, berries, nuts, fruit, insects, worms, and slugs. 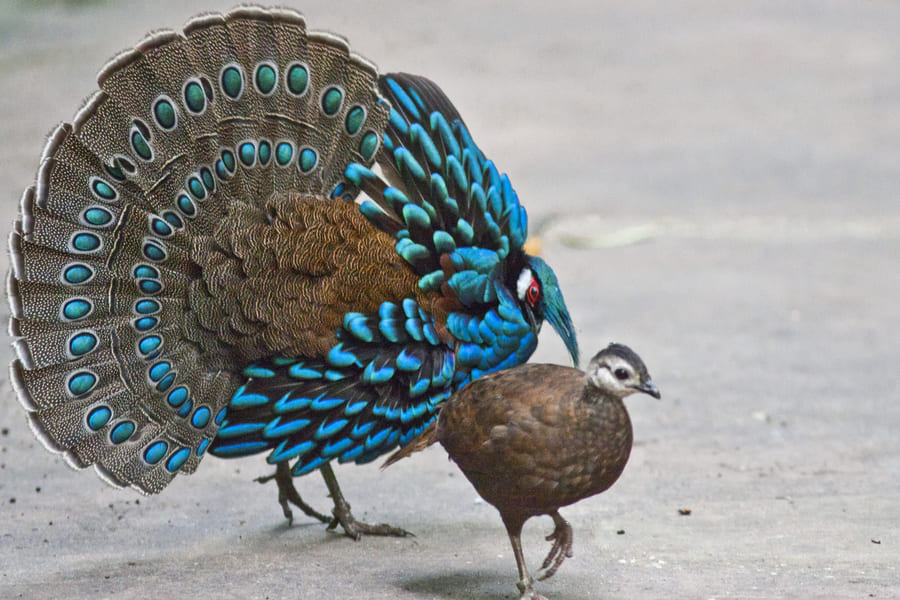 When the mating season begins, male birds offer foods to the females. If female birds accept, the male will do a performance, fanning his tail and compressing his wings to show off his stunning plumage. This species’s population was previously estimated at fewer than 10,000 mature individuals by McGowan and Garson (1995). Densities recently calculated in Puerto Princesa Subterranean River National Park suggest that the figure given by McGowan and Garson (1995) is likely to be an underestimate, based on estimated forest coverage on Palawan. However, the latest density estimates are unlikely be representative of the whole island. With this in mind, the species’s population is conservatively placed in the band 20,000-49,999 individuals. 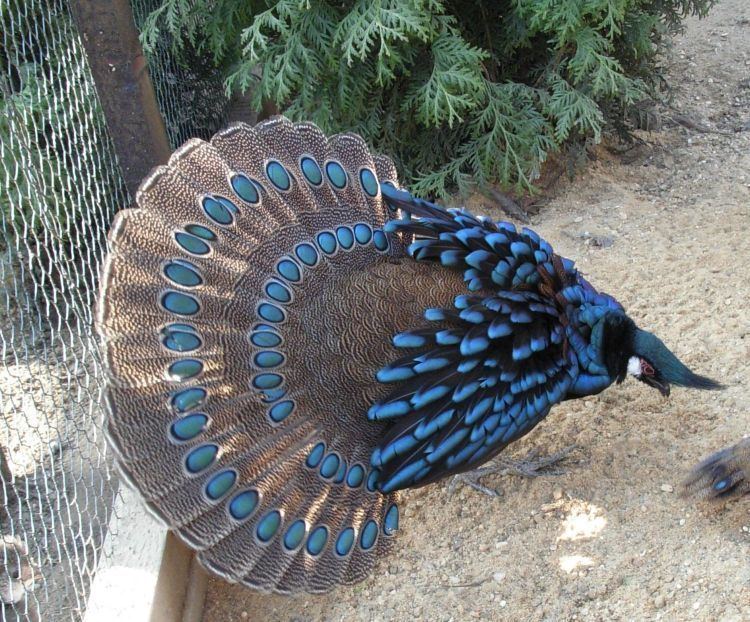 Female birds then lay 2 eggs on the ground and incubate them for 18- 20 days. They will feed the hatchlings until they are fully-fledged. In recent years, the population of Palawan peacock-pheasants has decreased quickly due to the loss of habitat (over-exploitation and deforestation). The Palawan Islands is now just a Biosphere Reserve. Additionally, this bird has been trapped for the pet trade and hunted for meat, causing the decline of its population. It’s now highly endangered. 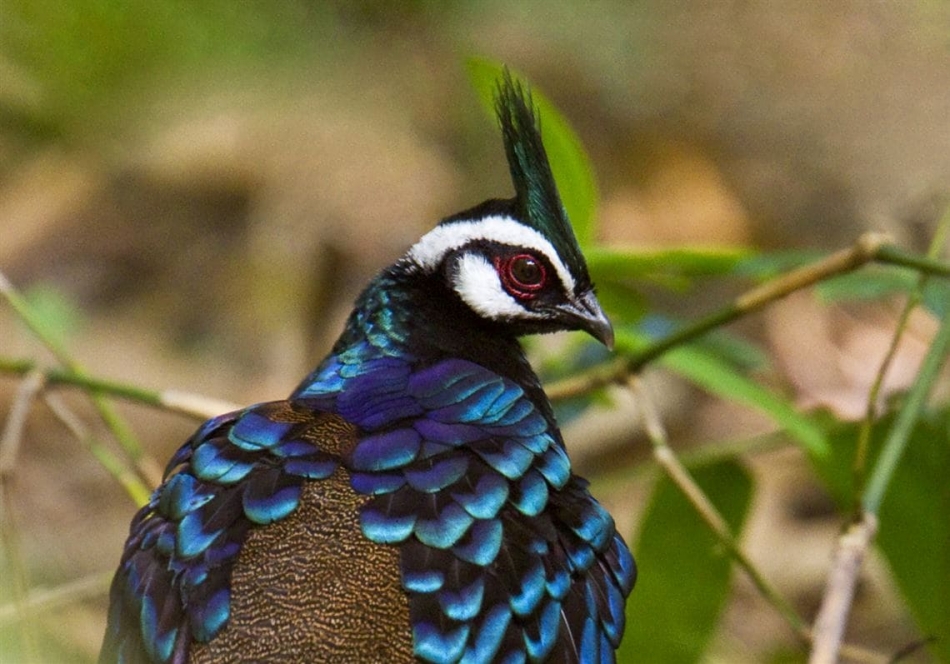 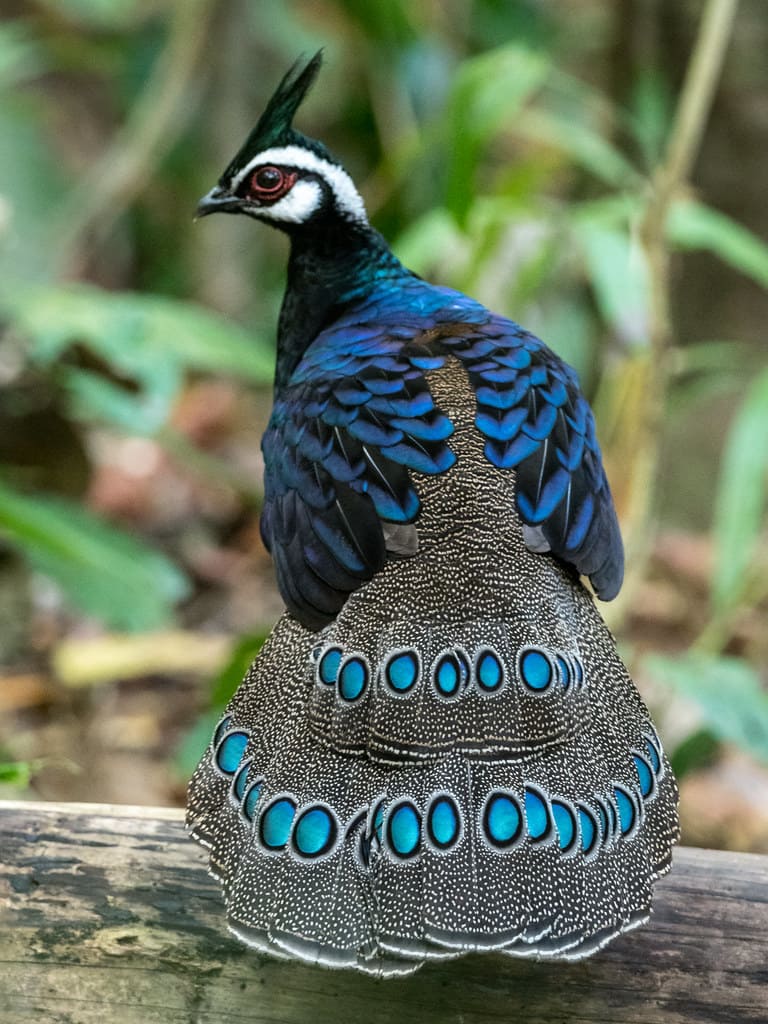 It mainly inhabits primary and secondary forest on flat and rolling terrain, up to c.800 m, occasionally occurring almost up to mossy forest and in Casuarina-dominated dwarf forest on serpentine rock. Surveys in Puerto Princesa Subterranean River National Park found evidence that the species shows a strong preference for old growth forest over advanced secondary growth, which in turn appears to be preferred over early secondary growth, with none recorded in cultivation (Mallari et al. 2011). The species’s population density is thus positively correlated with the density of large trees (Mallari et al. 2011). 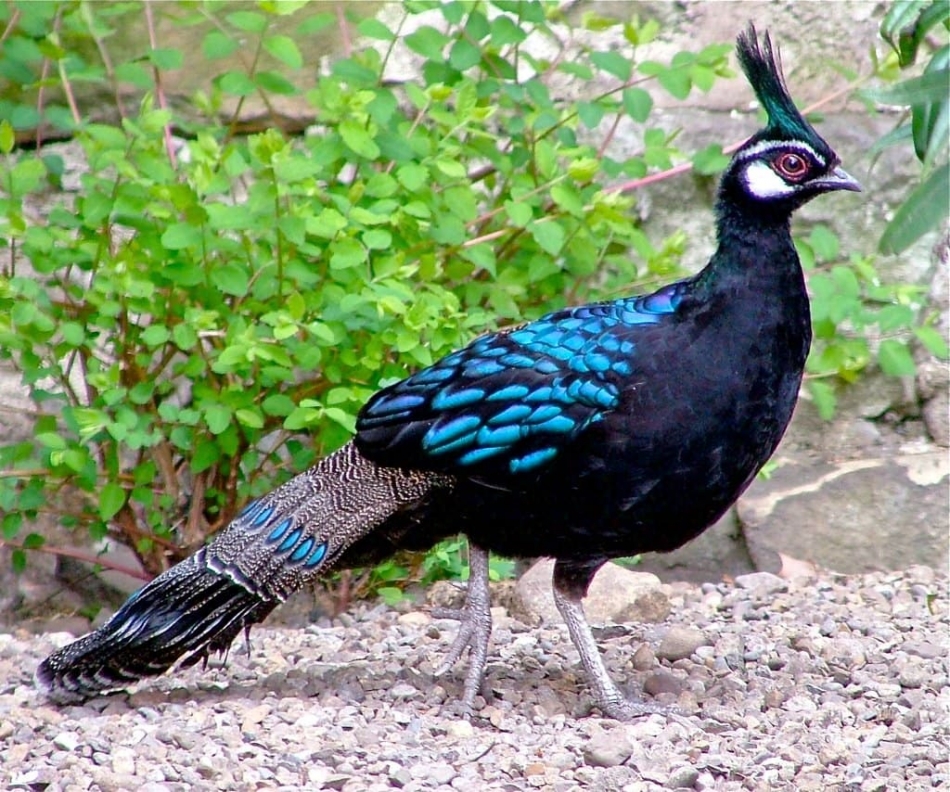 Deforestation in lowland Palawan has been extensive, and reached a rate of 11% between 2000 and 2005 (Mallari et al. 2011). Logging and mining concessions have been granted for almost all remaining forest on the island. As of December 2008, nine Small Scale Mining Permits had already been issued and there were 354 mining applications pending, covering 6,510 km2 of land within Palawan province (Mallari et al. 2011). Illegal logging is thought to persist in the remaining extensive forest of the south. Forest at Iwahig Penal Colony, regarded as a key site, may be threatened by plans to mine chromite. By the late 1960s, the species was being extensively hunted and trapped in large numbers for live trade, but exports were much reduced by the late 1980s. In the mid-1990s, it was heavily hunted adjacent to Puerto Princesa Subterranean River National Park, and this protected area is still subjected to pressures on habitats, including agricultural encroachment and the harvesting of non-timber forest products (Mallari et al. 2011). 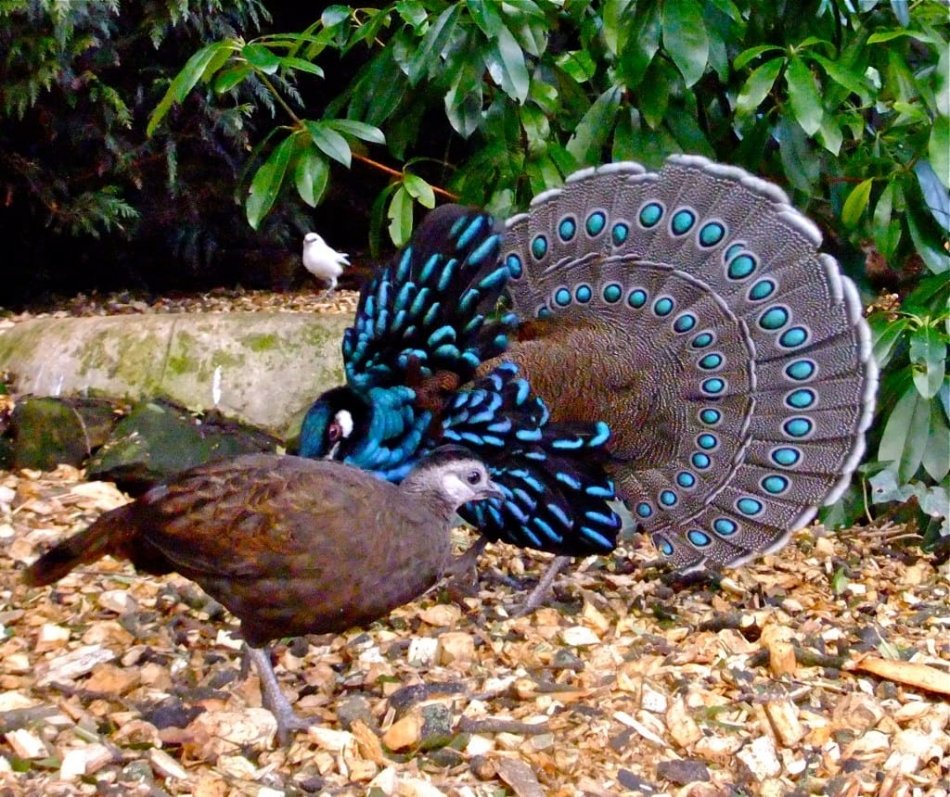 Conservation Actions Underway: CITES Appendix I. The whole of Palawan is classed as a game reserve, where hunting is illegal. In 1990, the entire island was designated as a Biosphere Reserve, although the legislation controlling habitat alteration and hunting is extremely difficult to enforce effectively. It occurs in two protected areas: El Nido Marine Reserve and Puerto Princesa Subterranean River National Park (the latter, a UNESCO World Heritage Site and part of the National Integrated Protected Areas System, has been extended to the east, where the species is also known to occur and is under effective management by the local Government of Puerto Princesa city). It was recently used as a flagship species behind efforts to galvanise conservation efforts under the project – Managing threats to key birds in the Palawan corridor: capacity building through applied research (Mallari and Lee 2006). It also featured on a bilingual environmental awareness poster in the Only in the Philippines series and is part of the European Endangered [Species] Programme of the European Association of Zoos and Aquaria (www.eaza.net). 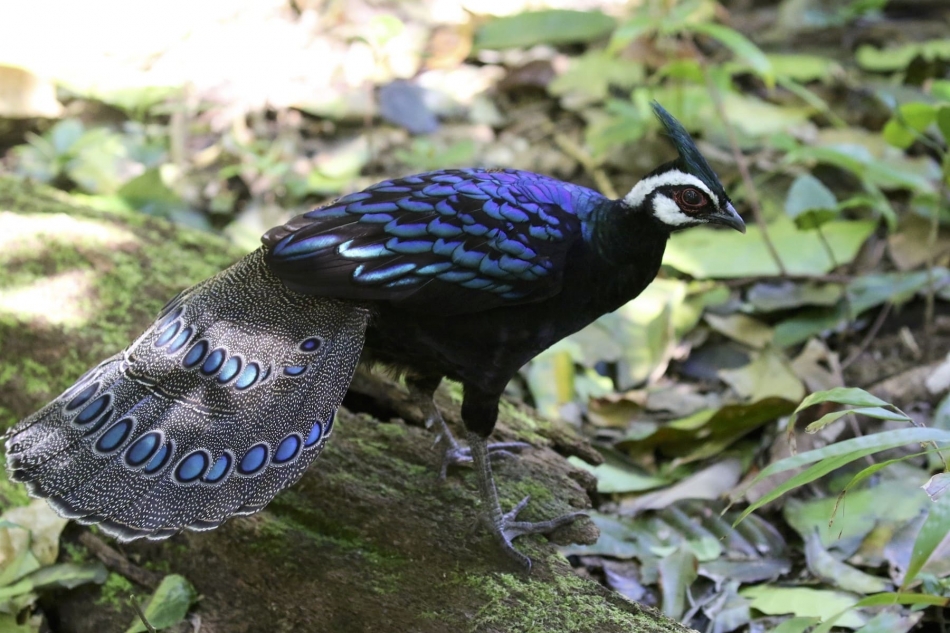 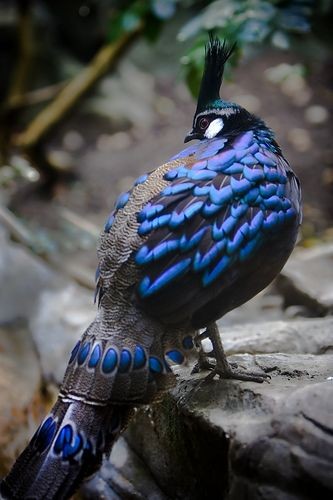