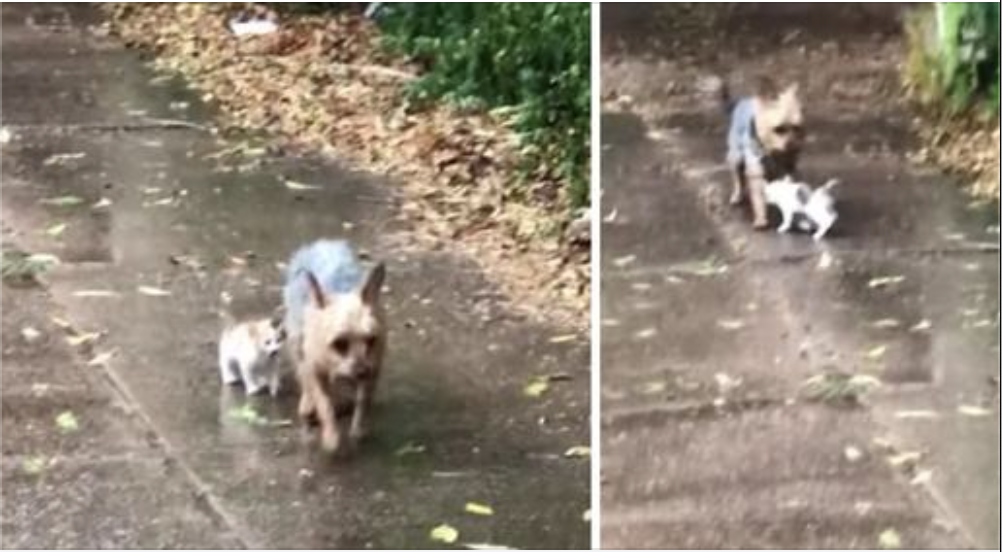 -Advertisment-
The pup’s owner didn’t know why the dog was taking so long with her potty break until she looked out the window.

Dogs are loyal and perceptive animals who love helping those in need. Some of the most empathetic pups become services dogs and therapy dogs. The adorably fluffy Hazel happens to be one of those dogs that brings a smile to her hooman’s face every single day with her actions and cheerful, peppy attitude.

This Yorkie-Chihuahua-poodle mix lives in Abilene, Texas, with her mom Monica Burks, 48, and is clearly compassionate, not unlike some of the service dogs. One day, Monica scooted three-year-old Hazel outside so she could take a potty break, albeit in the rain.

But after a bit of time, Monica realized that her baby hadn’t returned and instantly became alarmed.

She peeked outside to see if Hazel had gotten into some mishap and couldn’t believe what she saw.

Hazel likely had heard the pathetic whimpering coming from a teeny tiny kitten left all alone by the road in the pouring rain. Hazel checked out this poor little baby and instantly became attached to the lonely, furry and drenched kitten. Instinctively, Hazel knew she needed to help the kitten and the only thing she could think of was to escort the baby into her own house and to her hooman Monica.

The kitten tentatively followed Hazel a few steps, then stopped. Hazel kept turning toward her, willing her new BFF to continue following her.

Even though it was raining cats and dogs, Hazel would not give up on this frightened kitten. It took forever, but finally, they reached the front of the house.

Monica was stunned when she saw her sweet pupper guiding a stray kitten toward their home in the downpour. She whipped out her phone and recorded this incredible moment to share with others.

“There must be something called pure love. I saw Hazel’s maternal instincts come to light.” You can hear the heavy rain pelting the house’s roof, the car, and the sidewalk but you can still clearly make out the poor whimpering kitten.

She backpedals and tries to take off, but Hazel won’t give up on her.

The kitten sweetly approaches Hazel every time, wondering just who is her rescuer? She trails after Hazel obediently, mewing loudly. It took numerous attempts, but Hazel coaxed the kitten to the front doorstep and the welcome mat. But the baby was too itty bitty to hurdle the high step inside.

So Hazel gingerly clasped onto the kitten by the scruff of her little neck and together they went inside the house. As soon as they reached the safety of Hazel’s house where it was dry and warm, the baby rolled onto her back.

Monica began tenderly caring for the baby under Hazel’s watchful eye. They named her Sheba and Monica’s brother Michael ended up adopting her. Since the two formed such a strong bond, Michael and Monica always make sure the pair spend lots of time together. These two clearly love each other so much.

Check out the moment Hazel found Sheba in the video below!