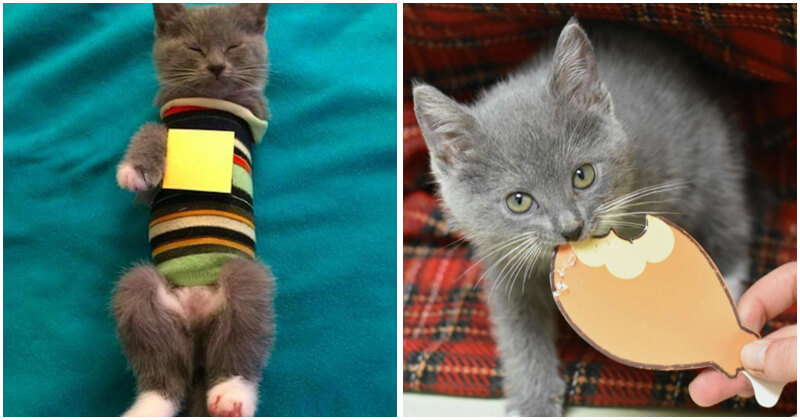 In October 2016, a tiny, grey ball of light came into the world, but something wasn’t quite right. 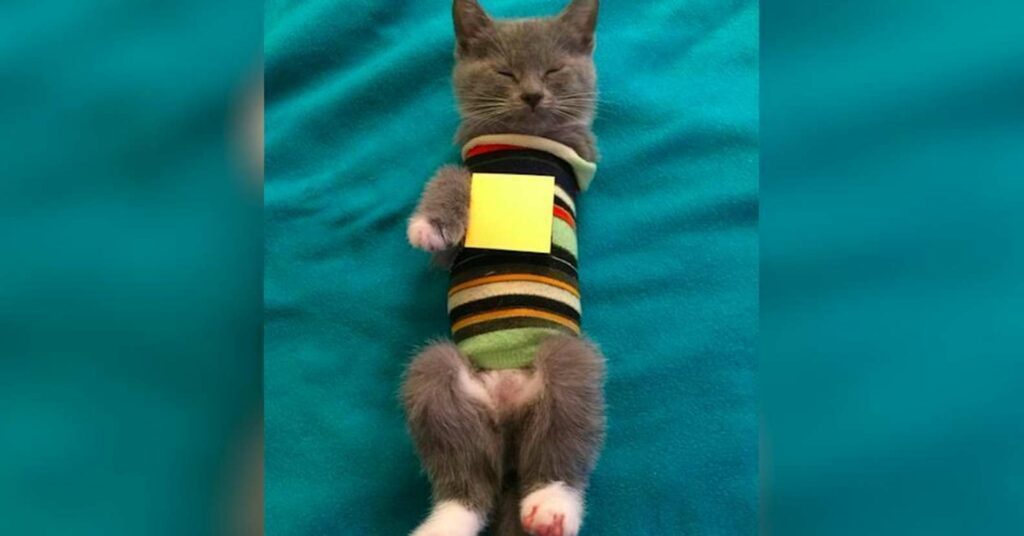 This 2-month-old kitten was born with only three legs, and was slated to be put down at the Philadelphia shelter where she was being held. Until a woman named Holly Dixon stepped in. 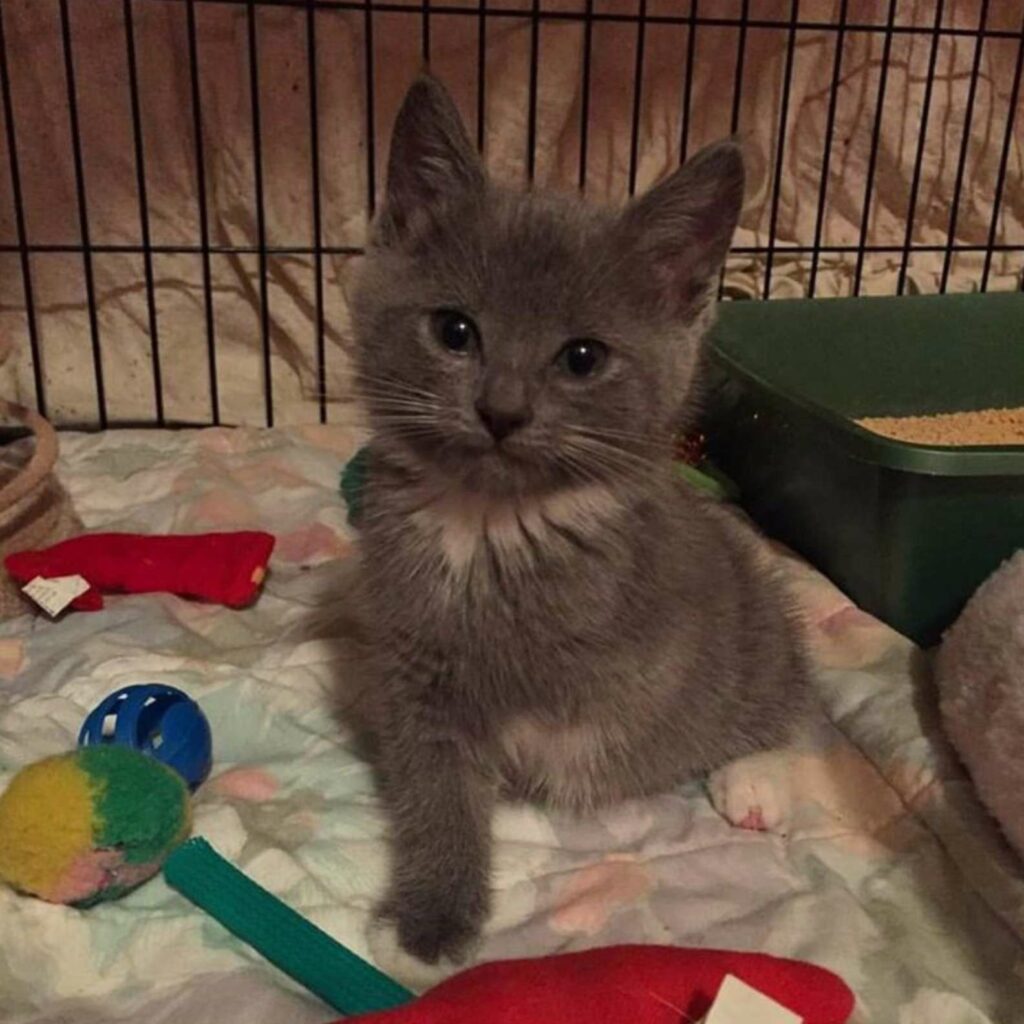 Dixon, a Philadelphia-based medical editor, first came across the grey bundle of joy on Facebook. “I first saw Olive on the urgent cat list,” Dixon told The Dodo. “I help run the Philly Urgents Facebook page, and the shelter sends us the list of any ‘timestamped’ [at risk for euthanasia], or urgent cats, so we can help promote them to find rescues, adopters or fosters.” 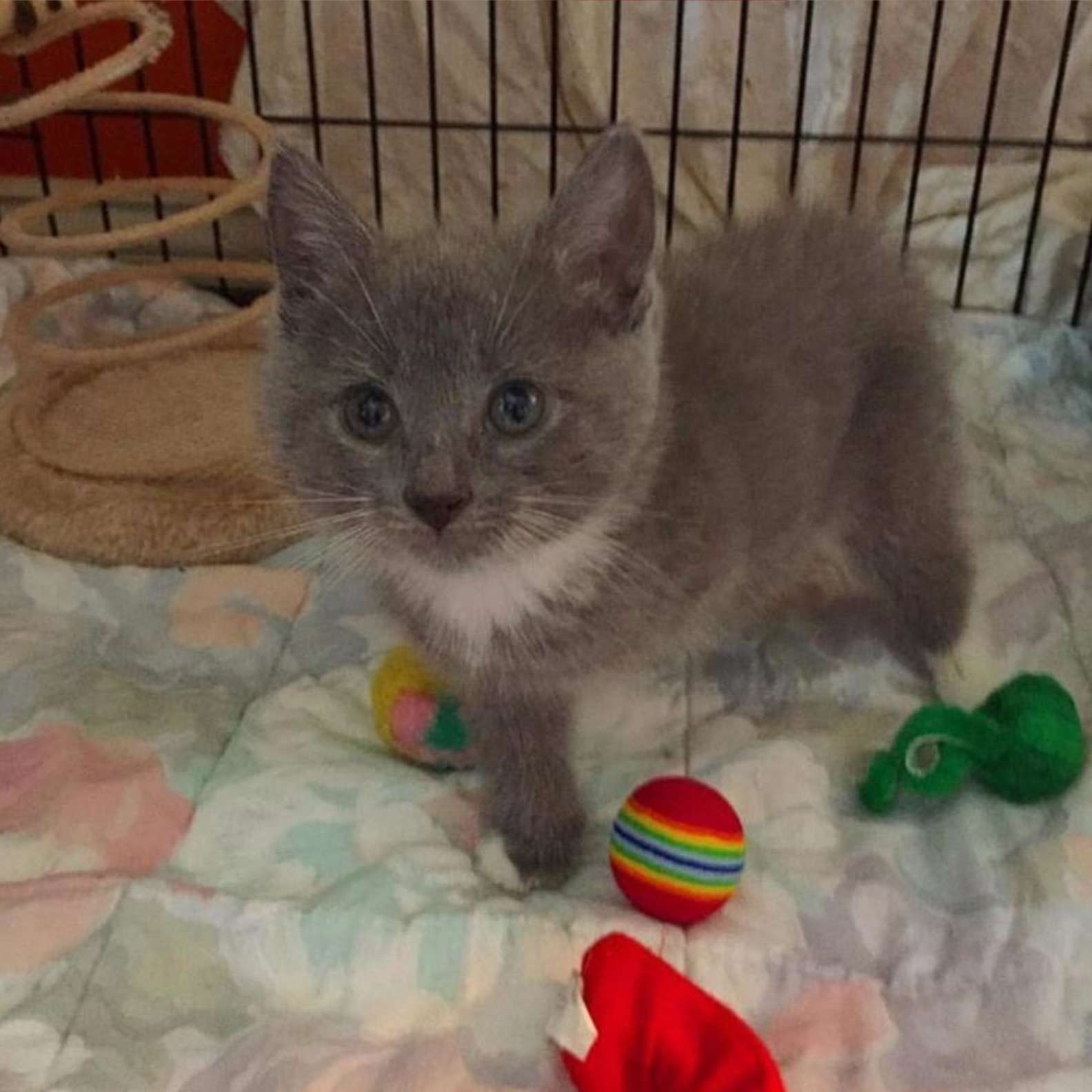 Olive was brought to Animal Care & Control Team of Philadelphia (ACCT Philly), along with her mother and littermates, after being found somewhere in Philadelphia, according to Dixon. However, all of Olive’s siblings, who were healthy and without life-threatening birth defects, were soon adopted.

Dixon knew she had to act fast to save this special needs kitten – shelter staff also suspected Olive had a diaphragmatic hernia, according to Dixon, which could impact the cat’s ability to breathe, among other serious complications. 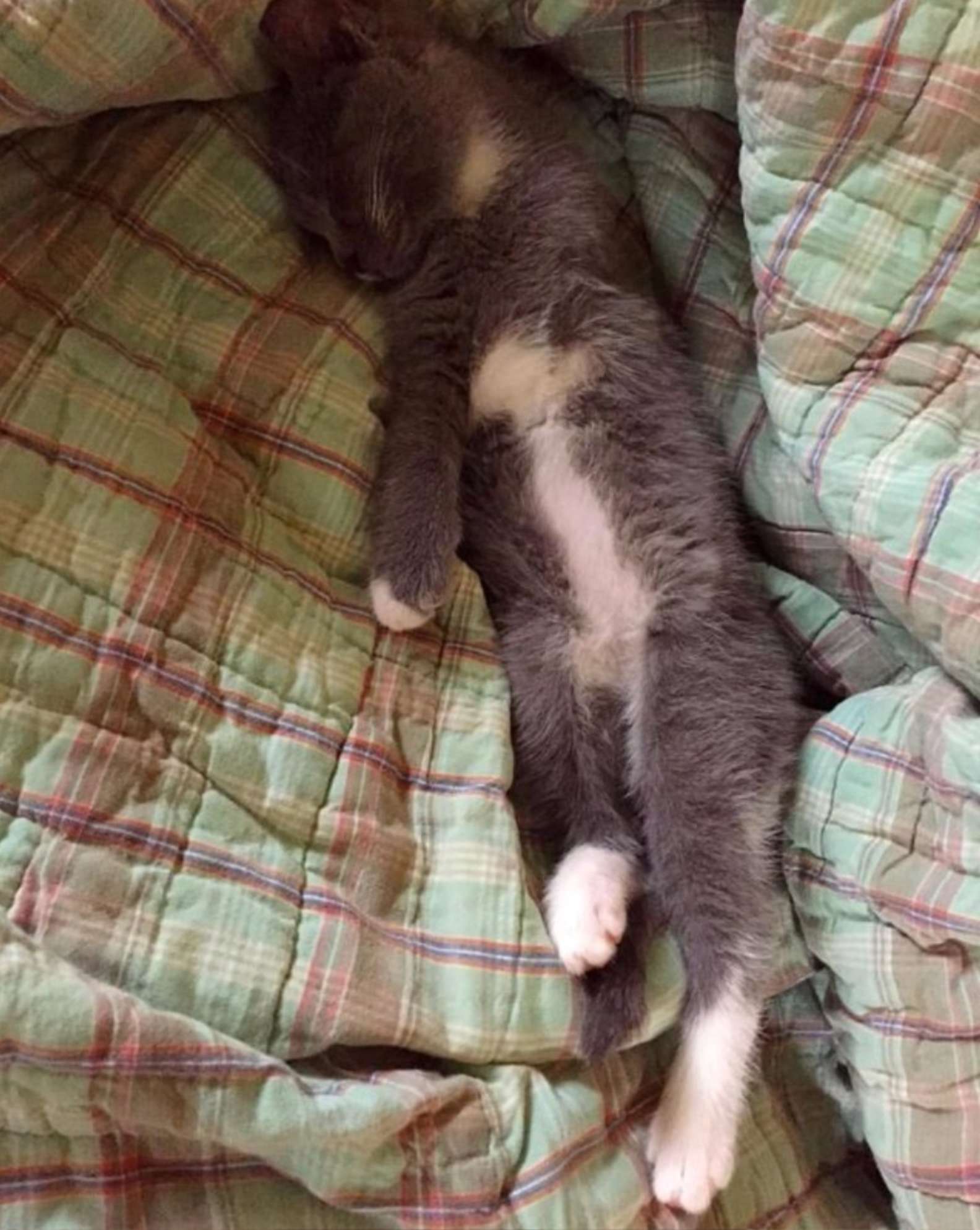 “My immediate response to seeing Olive on the urgent list was to contact The Philly Kitty Rescue,” she said. “I’ve worked with them several times before, and I know they have a propensity for saving special needs cats and kittens. Without hesitation, they agreed Olive could join the rescue under my care as foster.” 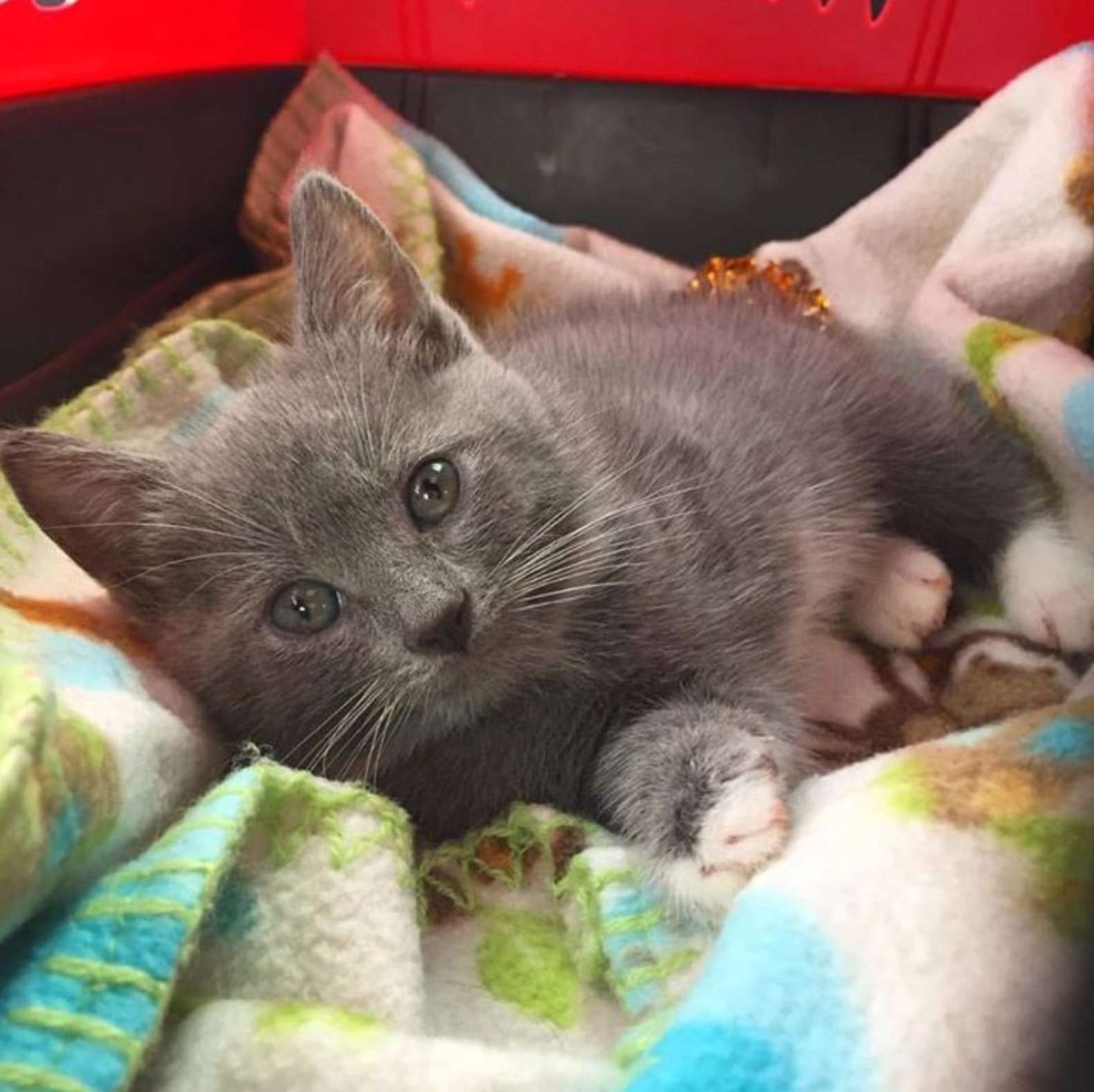 Along with Dixon, volunteers with Philly Kitty swooped in to save Olive.

The first time Dixon met the kitten in person, she discovered how unique Olive really was. “Aside from her missing leg, she appeared to be a normal kitten when I met her at the shelter,” Dixon said. “It wasn’t until I put my hand under her to lift her from the carrier that I could literally feel her tiny heart beating against my hand. That’s when I really understood the enormity of her situation.” 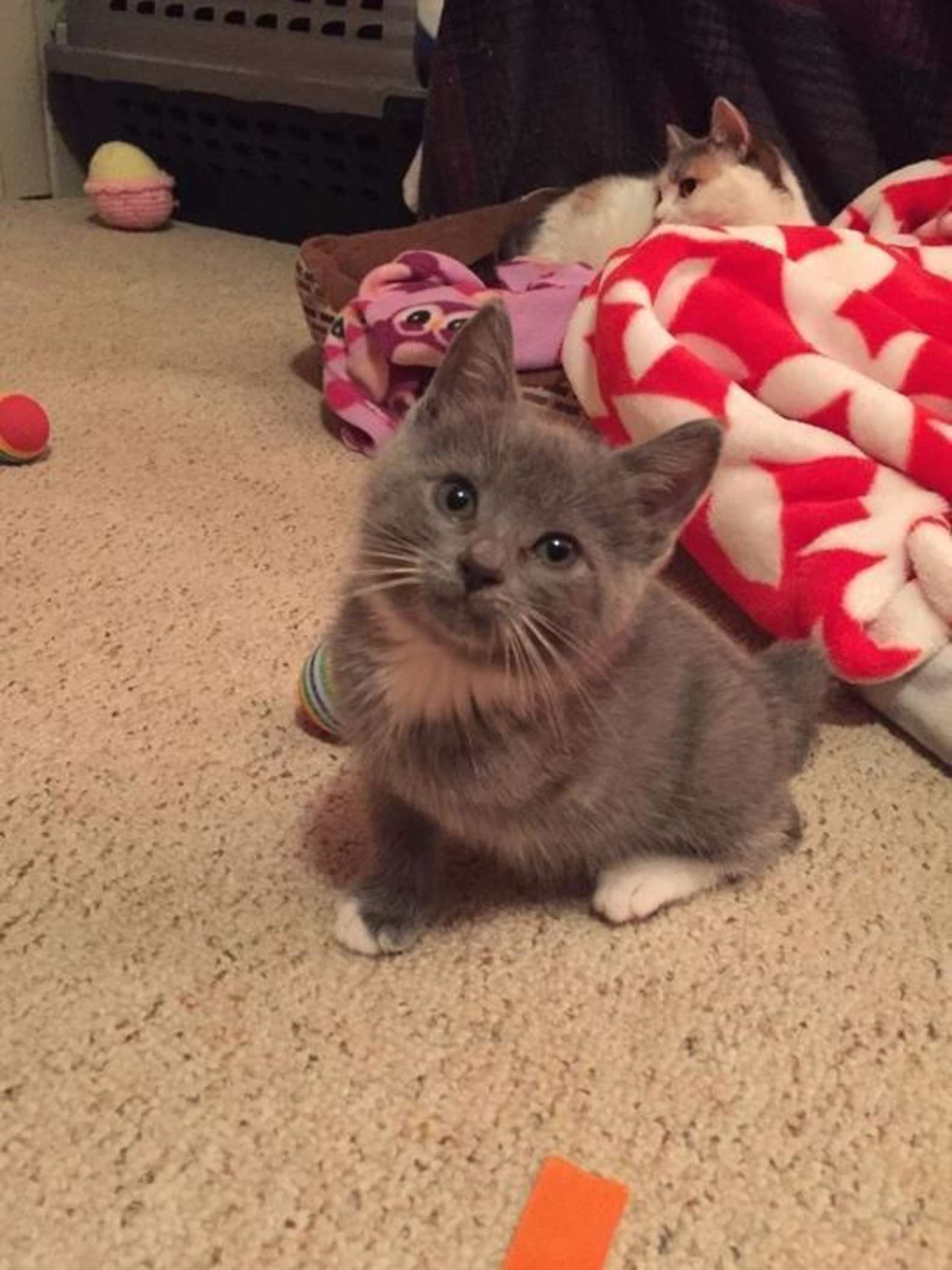 So, Dixon decided to take Olive under her wing. After countless visits to the vet, Dixon finally received a diagnosis properly explaining the poor cat’s condition. She was born with a congenital amputation of her left front leg, according to Dixon. In short, she was born without her limb. Additionally, vets told Dixon that Olive was missing most of her sternum and her ribs hadn’t fused to the sternum section that remained. 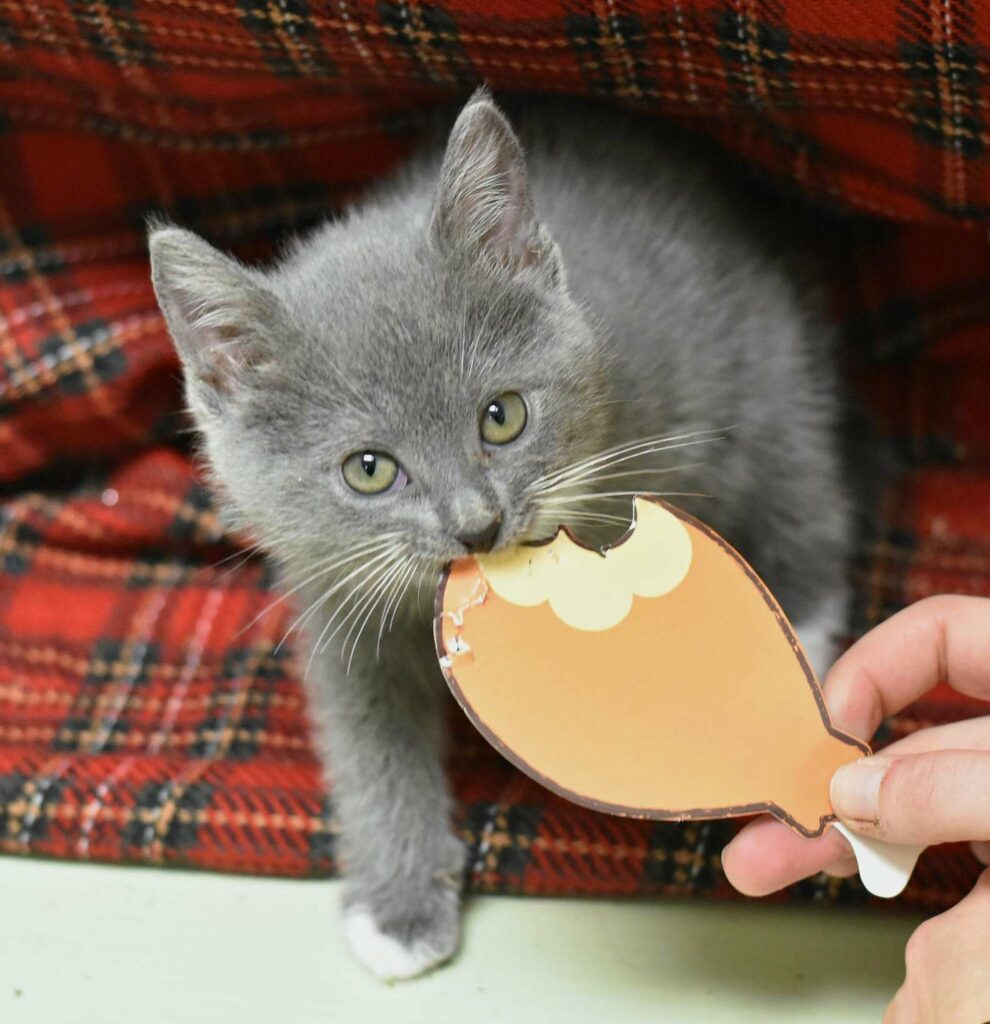 The combination of an amputated left front leg and a missing sternum section meant Olive’s heart was dangerously vulnerable – Dixon said she could feel Olive’s heartbeat with her finger.

Given Olive’s medical issues, one might assume she would be a timid, skittish cat, but she’s far from it, according to Dixon. “Olive is such a happy kitten,” she said. “The minute I enter the foster room, I can hear her purring in her cage. She is not the least bit shy and she loves exploring and meeting new people. She has boundless energy – I’ve been fostering for almost 10 years and I’ve yet to see a kitten with stamina like hers.” 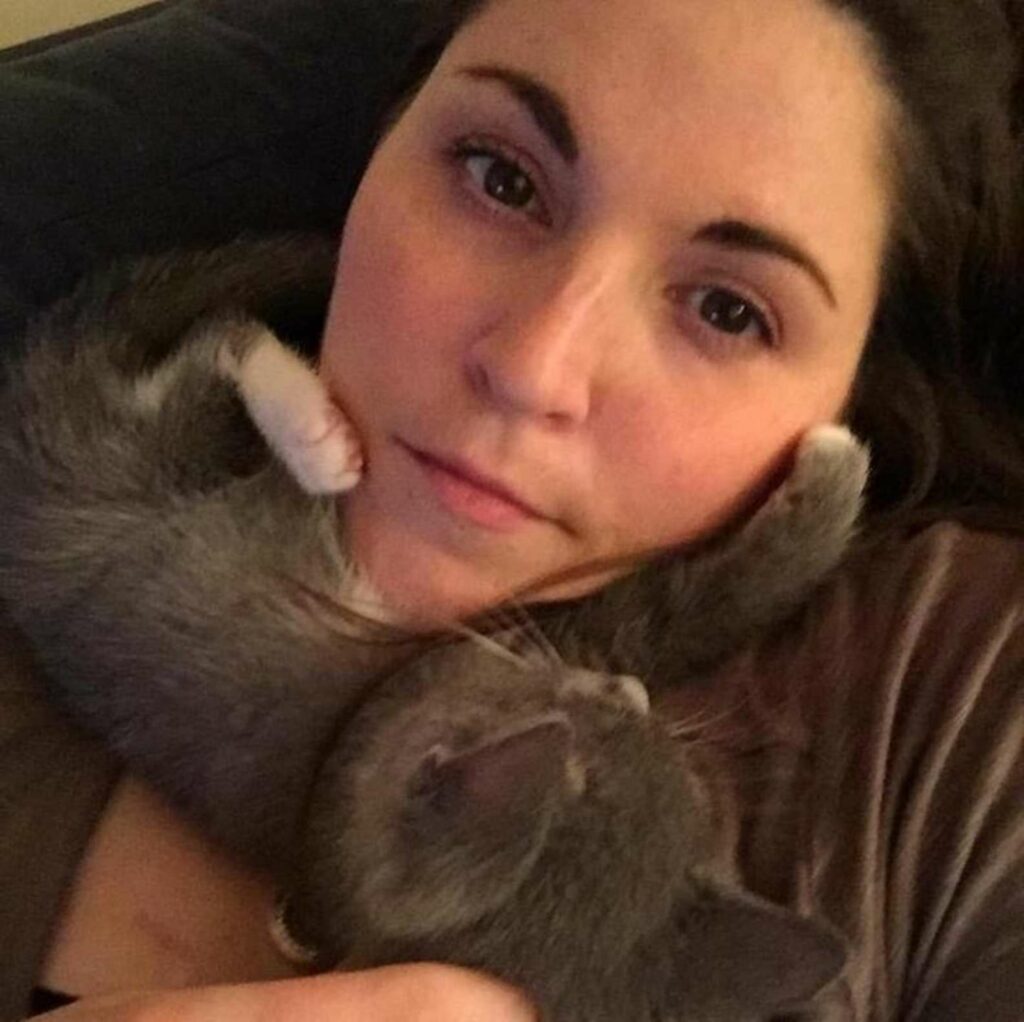 Olive doesn’t know she’s different than other cats, of course. She just wants to play more than anything, said Dixon. “I do have resident cats and other foster cats, and Olive would love to be able to play with them more often. I have to monitor her when she is out of her cage to make sure she’s not in danger.”

Once she has her surgery, she is going to absolutely adore being able to wrestle with other cats and kittens,” Dixon said. 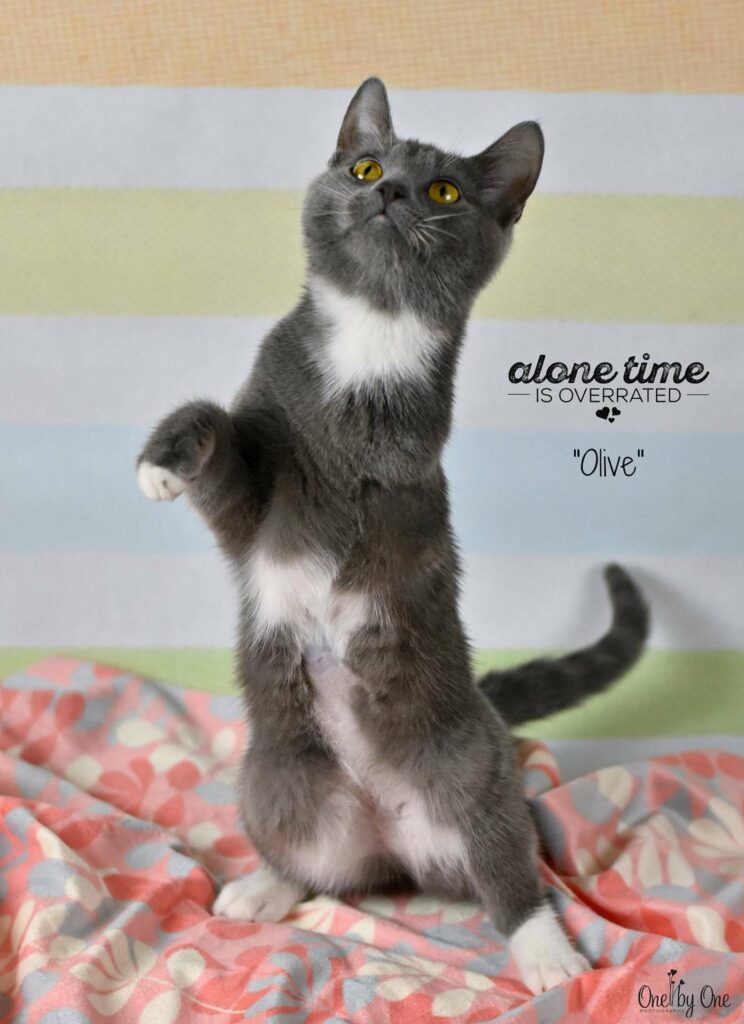 Not all special needs cats find caring foster parents willing to do whatever they need to care for them, however. In a survey, Petfinder discovered that 99 percent of shelters and rescue groups house pets who are deemed “less adoptable.” Additionally, these animals often have to wait up to four times as long as others to get adopted. Survey respondents indicated that “pets with special needs” were the hardest to get adopted, led only by “senior pets” and “pit bull type dogs.”

“I encourage everyone to foster, specifically special needs or senior animals who may be passed over,” Dixon said. “These animals can have a great quality of life with a little human assistance. Olive continues to surprise me with what she is able to do daily. Never underestimate an animal’s ability to persevere.”

Dixon created a YouCaring page to raise money for Olive’s surgery, which vets recommended take place as soon as possible. With support from all over, Philly Kitty has managed to raise enough money to cover the surgery, but the rescue is still just a bit short of covering Olive’s (necessary) post-op treatment.