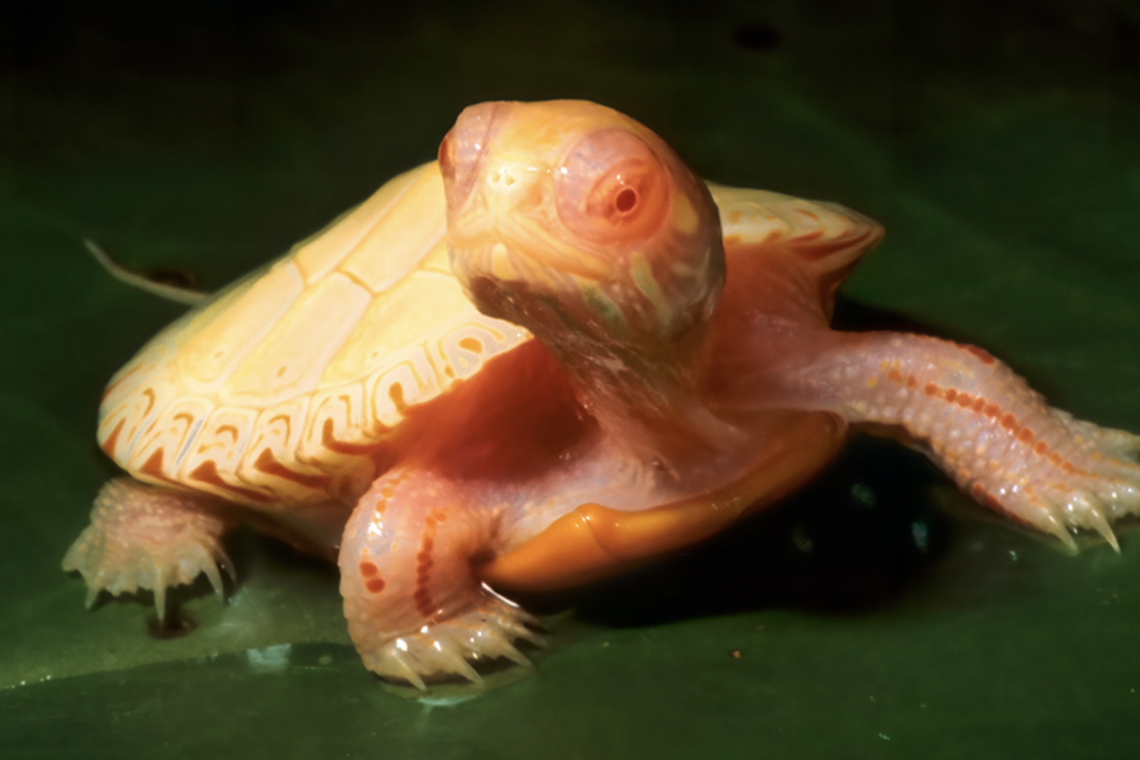 What are bright red and yellow and sometimes have a fiery pattern all over them? No, they’re not cartoon or video game characters – they’re albino turtles. They are rare, stunning, and highly vulnerable animals that you just have to see to believe. 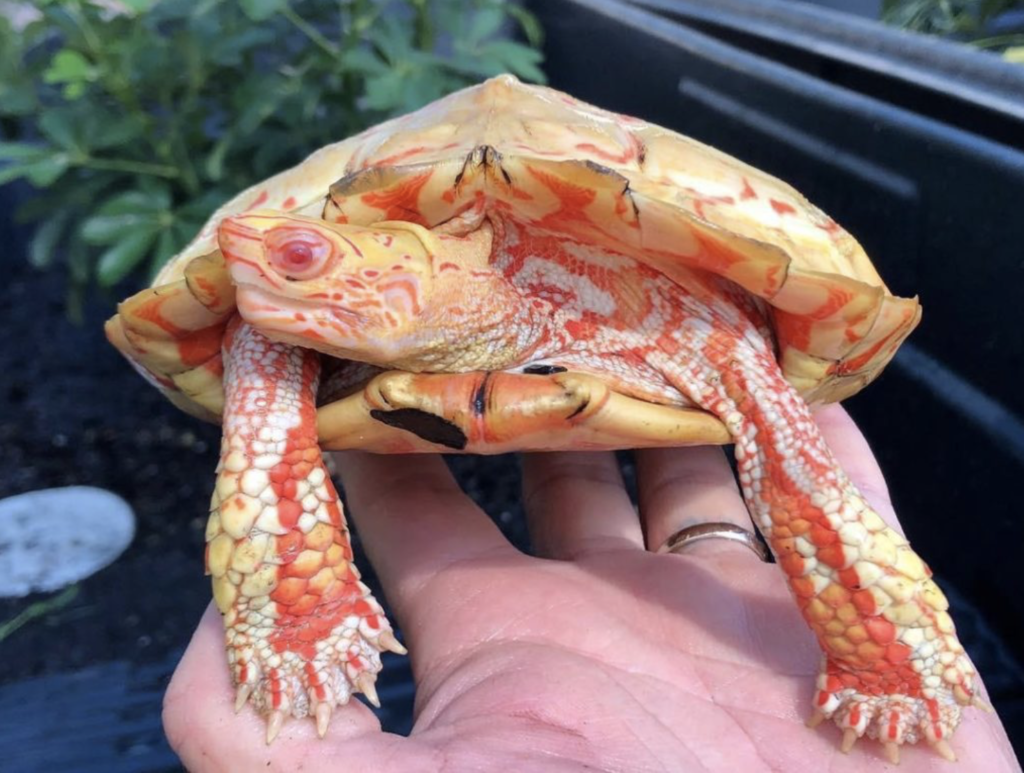 Some might say these look like some sort of mythical fire creature. Others will be reminded of Koopa Paratroopas from the Mario Brothers video games, or perhaps a strange combination of Pokémon’s Charizard and Squirtle.

Whichever you thought of first, we can assure you that these are actual, real, living animals. Though we refer to them as albino turtles, the more accurate term would be amelanistic turtles, because it is the melanin pigment that they are missing.  (1) 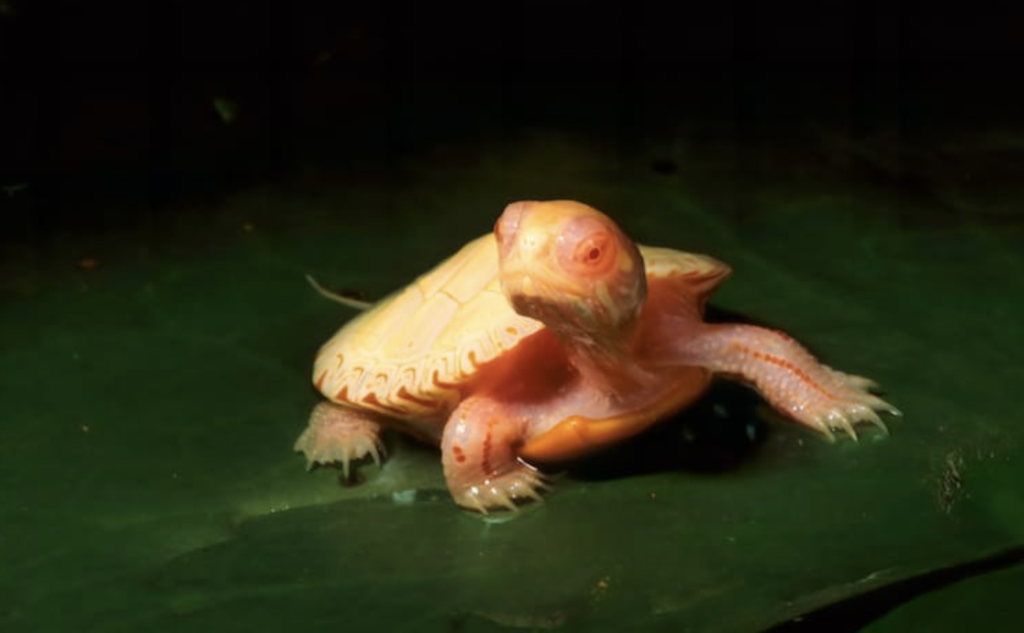 Albinism is a lack of pigmentation in the eyes, skin, and sometimes hair. It can happen in humans and other mammals, birds, reptiles, fish, and amphibians. Albinism is characterized by an entirely white appearance and red eyes. (2)

Amelanism is the complete lack of pigments or melanin. This condition occurs in fish, amphibians, reptiles, birds, and mammals. Usually, one pigment will still be present, which is why amelanistic animals can have yellow or red markings on them. Their eyes will also be red. (1)

Technically, albinism is a form of amelanism. (1)

Melanin is the compound responsible for the color of skin, hair, feathers, scales, and the eyes. It plays an important role in protecting humans and animals against the sun’s UV rays. Without it, these rays can much more easily cause damage to the cells’ DNA and cause illnesses such as cancer. (1)

Amelanism is much more common in reptiles, such as turtles than albinism, however, it is still extremely rare. (1) 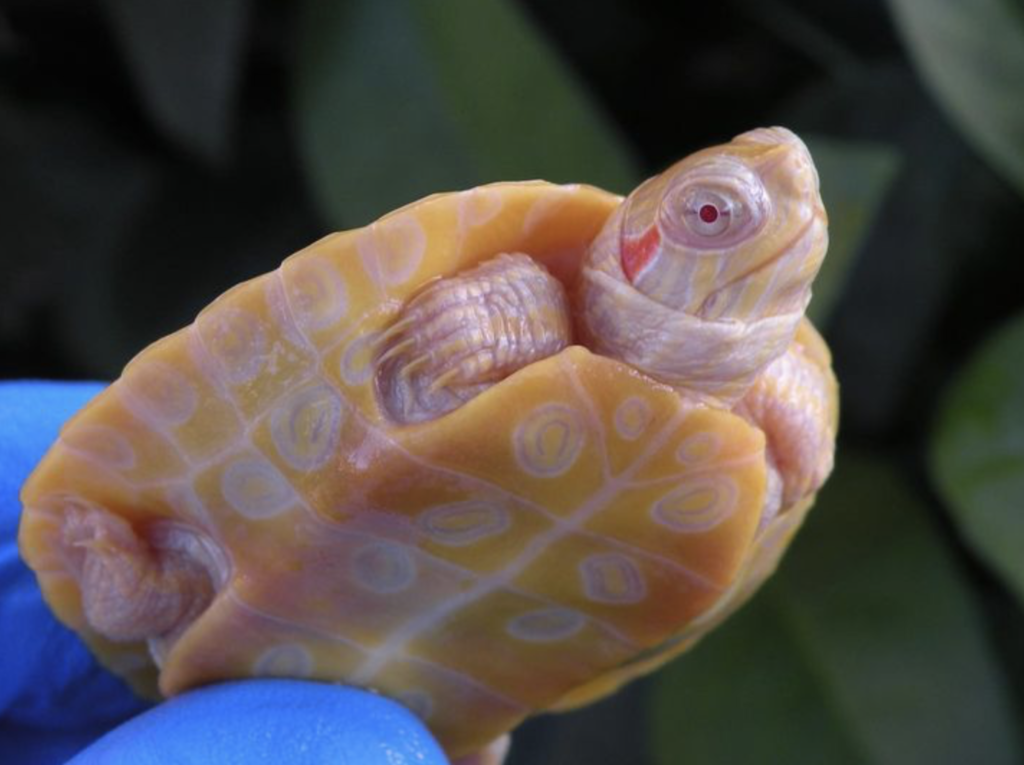 Albinism or amelanism will present itself differently depending on the species of turtle. For example, Sulcata turtles are more likely to actually have albinism, though they still won’t be 100% white. (3) Amelanistic Painted Wood Turtles are most likely to have the beautiful, fiery flame-like pattern mentioned above. (4)

Unfortunately, as stunning as these animals are, their unique appearance means that they likely won’t last long in the wild. Not only are they more susceptible to illness and disease, but they are also easily spotted by predators. Like humans with albinism, they also usually have poor eyesight, making staying safe and well-fed an extra challenge. (5)

Lastly, if they do survive to reproductive age, they are often considered undesirable as a mate and are therefore unlikely to reproduce. This is of course because they have a higher chance of producing amelanistic offspring, which as we know is not a benefit to wild animals. (5)

Albino Turtles Are Not Good Pets

These special turtles require a lot more time, attention, and care than other animals. They are best left in the wild (despite their low survival rates) or in an animal sanctuary under the care of professionals. They often have other health complications that are nearly impossible for a regular person to look after them.

One example of this is Hope the Albino Turtle, who was born with her heart outside of her shell. Under the expert care of her owner Mike, she not only survived but is thriving. Living up to her name, she spreads messages of hope and love to children and adults around the world going through major heart conditions, surgeries, and traumas. (6)

You can follow Hope and her other aquatic friends on Mike’s Instagram and well as support them here.