James Gifford , a 41-year-old photographer from the UK, who lives in Botswana, managed to capture the heartwarming moment when Ndeze, a female gorilla, emotionally hugs André Bauma, a worker at Virunga National Park in the Democratic Republic of the Congo.

Really this image is the maximum expression of love. James was pleasantly surprised by the special bond between the gorillas and André. He couldn’t believe what he was seeing, to the point of lowering the camera to focus on such a special moment. 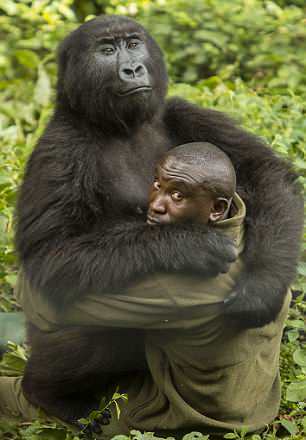 This photographer witnessed the gestures of love that not only this gorilla showed to this great man who loves animals, but also to the other two gorillas, Ndakas, who is another female and a male named Matabishi.

“André spent time preparing and communicating with the gorillas. Their relationship is very tactful. James recounted that these female gorillas were orphaned after the death of nine endangered mountain gorillas by rebel forces in 2007, and the babies were raised by André. This group of three loving do not hesitate to show the love they feel for their human friend. The hugs between them are very frequent.

“At one point, one of the gorillas wrapped André in a big, loving hug.”

After a while, the gorillas told André that it was time to go back to sleep and in an instant they tried to jump on the back of this park ranger so that he would carry them. “With a big smile, he managed to persuade them to get off and as he walked upright, one took his hand and led him away.”

This man has definitely done a great job raising these animals, who have experienced the pain of abandonment since they were very young. André has created a close bond with these gorillas that has grown stronger over time. After a decade of direct relationship with Ndeze and Ndakaslas, he continues to care for them as if they were his daughters. 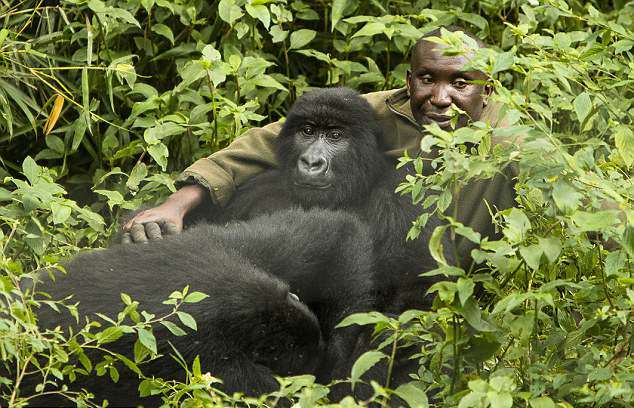 “The relationship between them is very remarkable. Watching them interact, you immediately realize how much the gorillas love and respect André.”

This man is like the alpha male within the group. André controls the behavior of these animals and also knows how to impose limits when necessary. Actually, this worker plays a role that is not easy at all due to the difference between the strengths of each one.

André and Ndeze look like father and daughter, they really feel very happy together. Share these lovely photos with your friends.