Tiny Beauty, Southern Double-collared Sunbird Is A Star Of The Forest 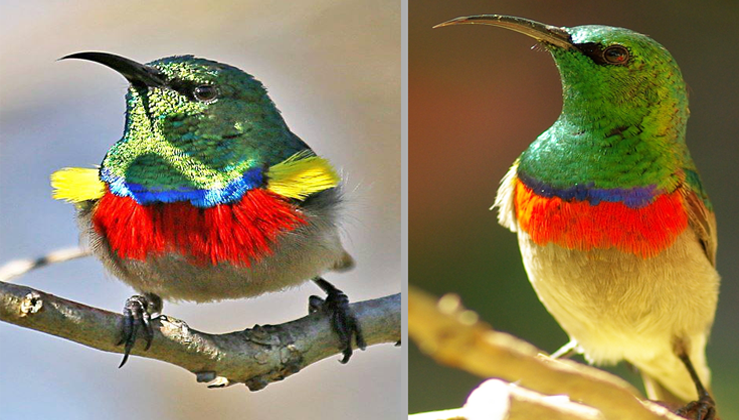 Where the Americas have hummingbirds, the Old World has sunbirds; brightly coloured jewels that flash in the light. The males often wear showy colours which makes identification straightforward while females tend towards the dull and difficult (my non-birding, proof-reading wife has just suggested that I change that last sentence, but you know what I mean).

Appearance: The Southern Double-collared Sunbird is 12 cm long. The adult male has a glossy, metallic green head, throat upper breast and back. It has a brilliant red band across the chest, separated from the green breast by a narrow metallic blue band. The rest of the underparts are whitish. When displaying, yellow feather tufts can be seen on the shoulders. As with other sunbirds the bill is long and decurved. The bill, legs and feet are black. The eye is dark brown. 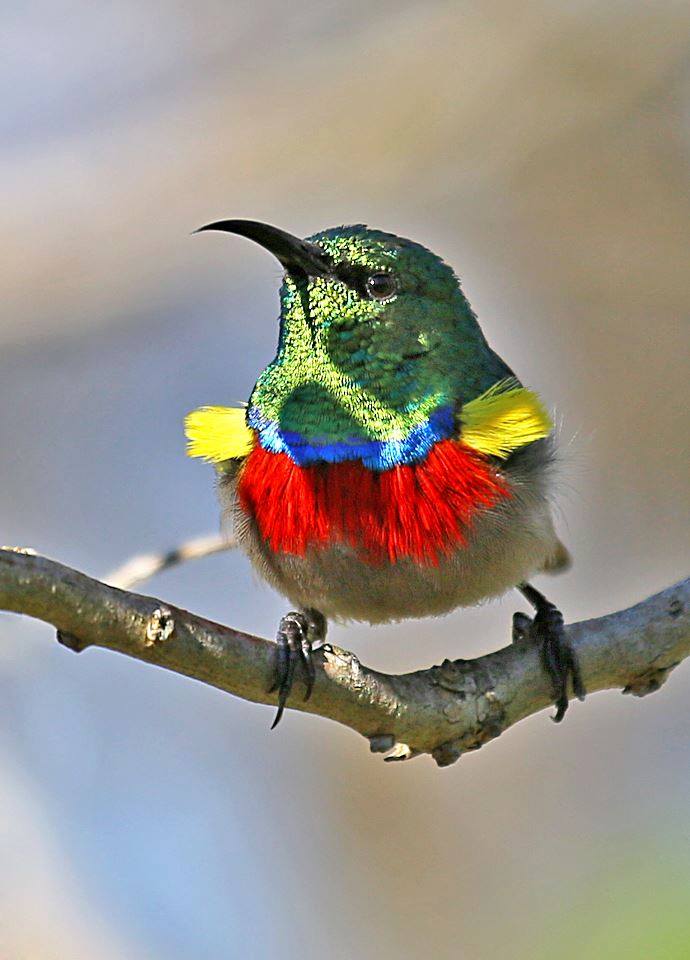 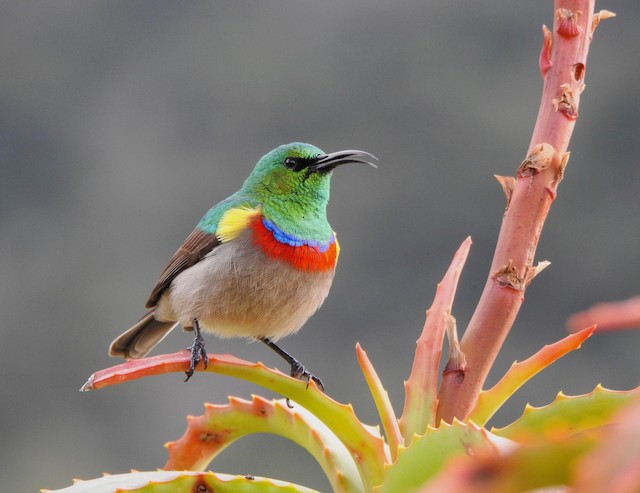 -Advertisment-
Behavior: The Southern Double-collared Sunbird is usually seen singly or in small groups. Its flight is fast and direct on short wings. It lives mainly on nectar from flowers, but takes some fruit, and, especially when feeding young, insects and spiders. It can take nectar by hovering like a hummingbird, but usually perches to feed most of the time. The call is a hard ”chee-chee”, and the song is high pitched jumble of tinkling notes, rising and falling in pitch and tempo for 3–5 seconds or more. 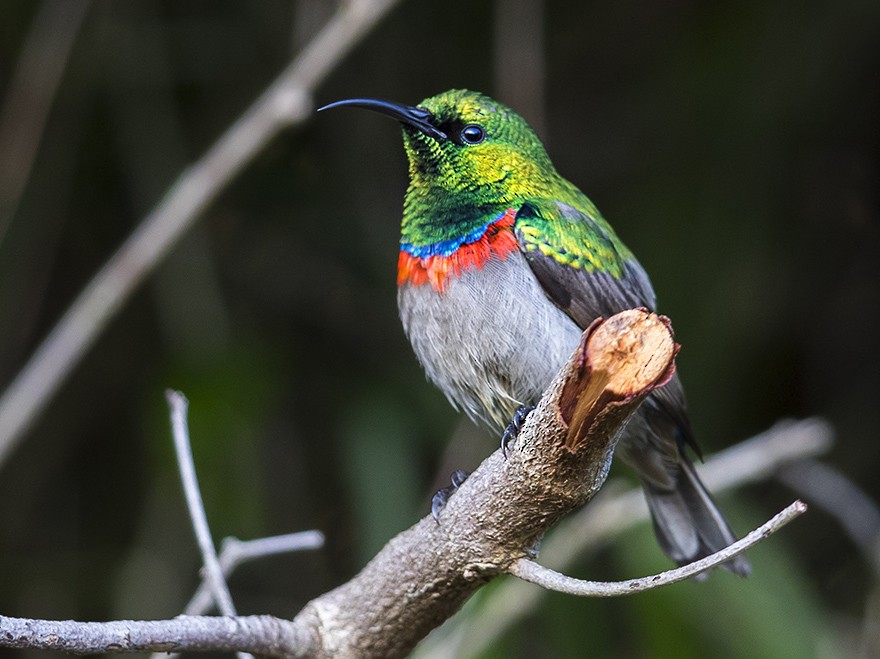 Breeding: They breed on forest edges and sometimes in gardens. The nest is an untidy oval that is usually 2m to 3m above the ground and is securely built into the foliage. It has a well-developed hood of fine grass that projects over the entrance and loose nesting material often hangs from the bottom. The laying months are typically July to November with a clutch size of two. The nests are frequently parasitized by Klaas’s Cuckoo. The incubation period is 15 to 16 days by the female only. Nestling/fledging period is 15 or 16 days. 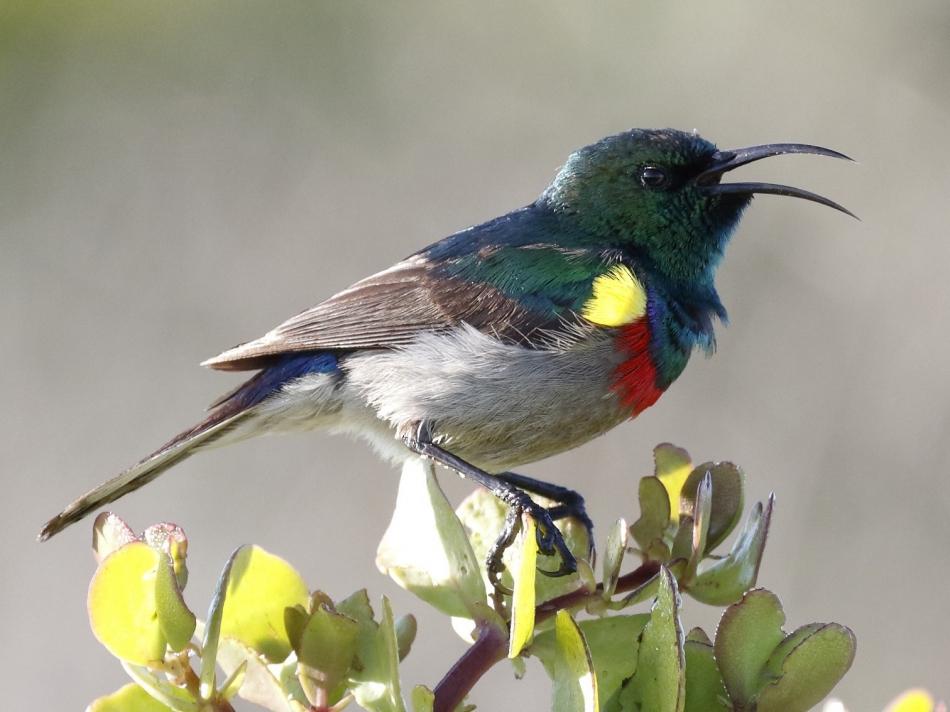 -Advertisment-
Habitat: This sunbird is common in gardens, fynbos, forests and coastal scrub. The Southern Double-collared Sunbird breeds from April to December, depending on region. The closed oval nest is constructed from grass, lichen and other plant material, bound together with spider webs. It has a side entrance which sometimes has a porch, and is lined with wool, plant down and feathers. 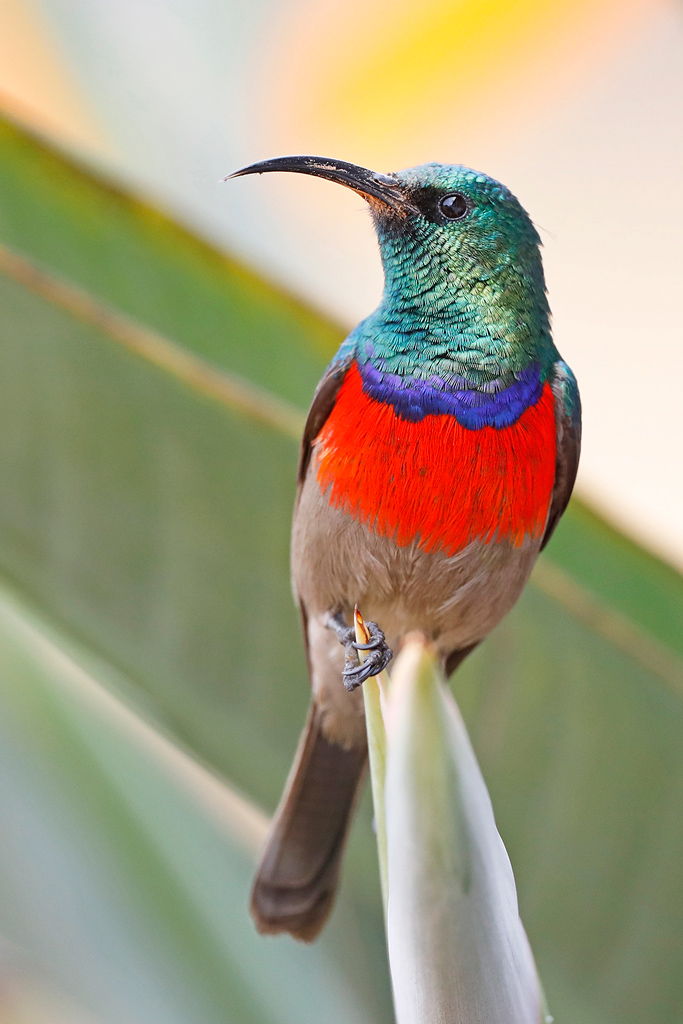 It is a common endemic that covers most of the eastern side of South Africa, including part of Swaziland but not Lesotho. It is a common resident in the Upper Highway area and not at all threatened. Interesting Facts: Sunbirds have different bill shapes and sizes that make it a species that is better suited for a specific flower for nectar extraction. This is thought to result from co-evolution, a process whereby two species undergo reciprocal genetic changes and develop traits to help each other. 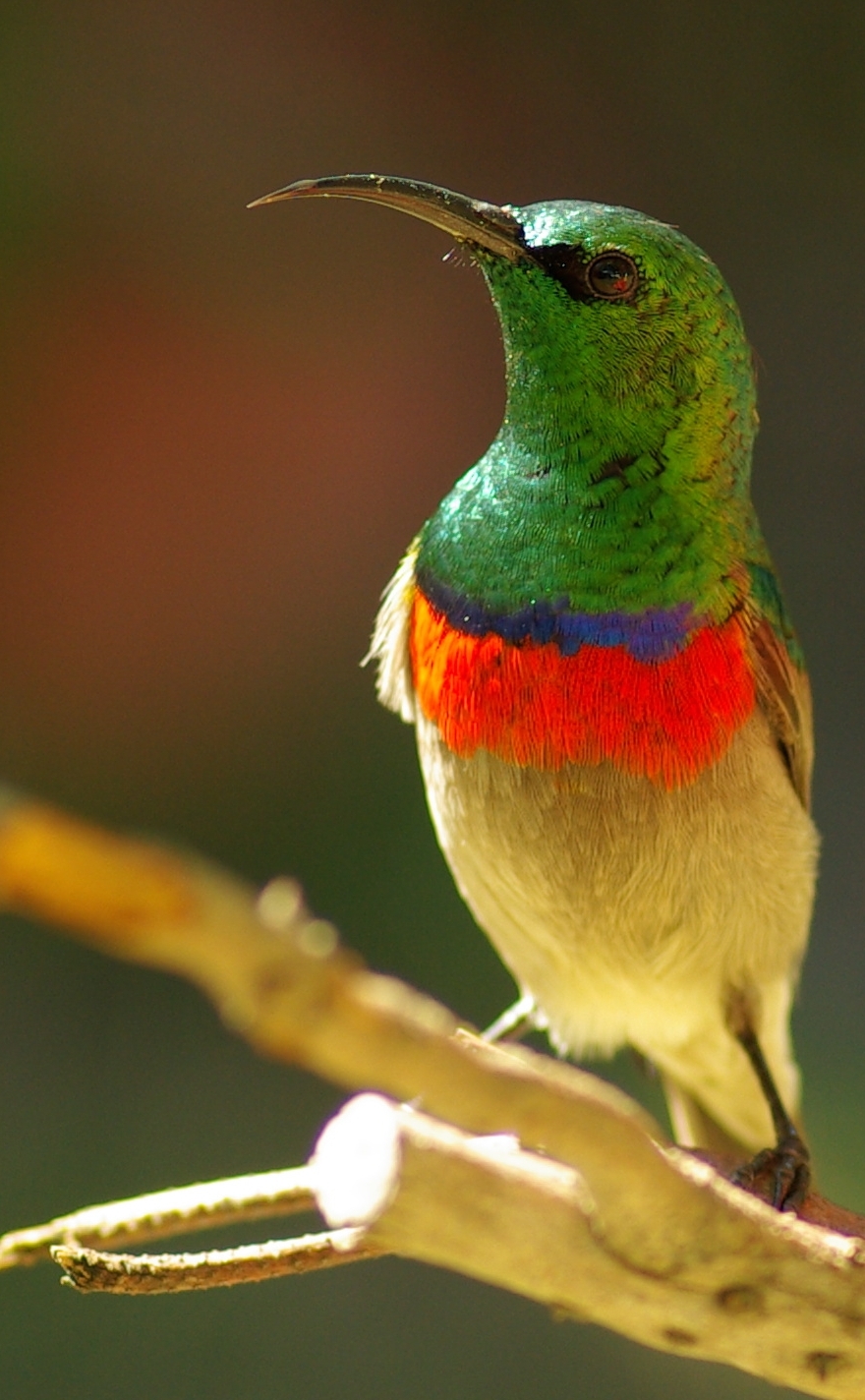 -Advertisment-
When my son was young, a sunbird built its nest next to a path that is near a forested section of our garden. He had a slightly older friend who came over to play and I thought it would be educational to show them the nest before I left for work. Strict instructions were given not to touch. You can imagine my horror when I returned home from work to see the nest in a box on the dining room table, with the two little darlings playing with the chicks. I was able to re-attach the nest about 1m from its original position. The adults continued to feed the chicks, none the worse for wear and they eventually fledged. 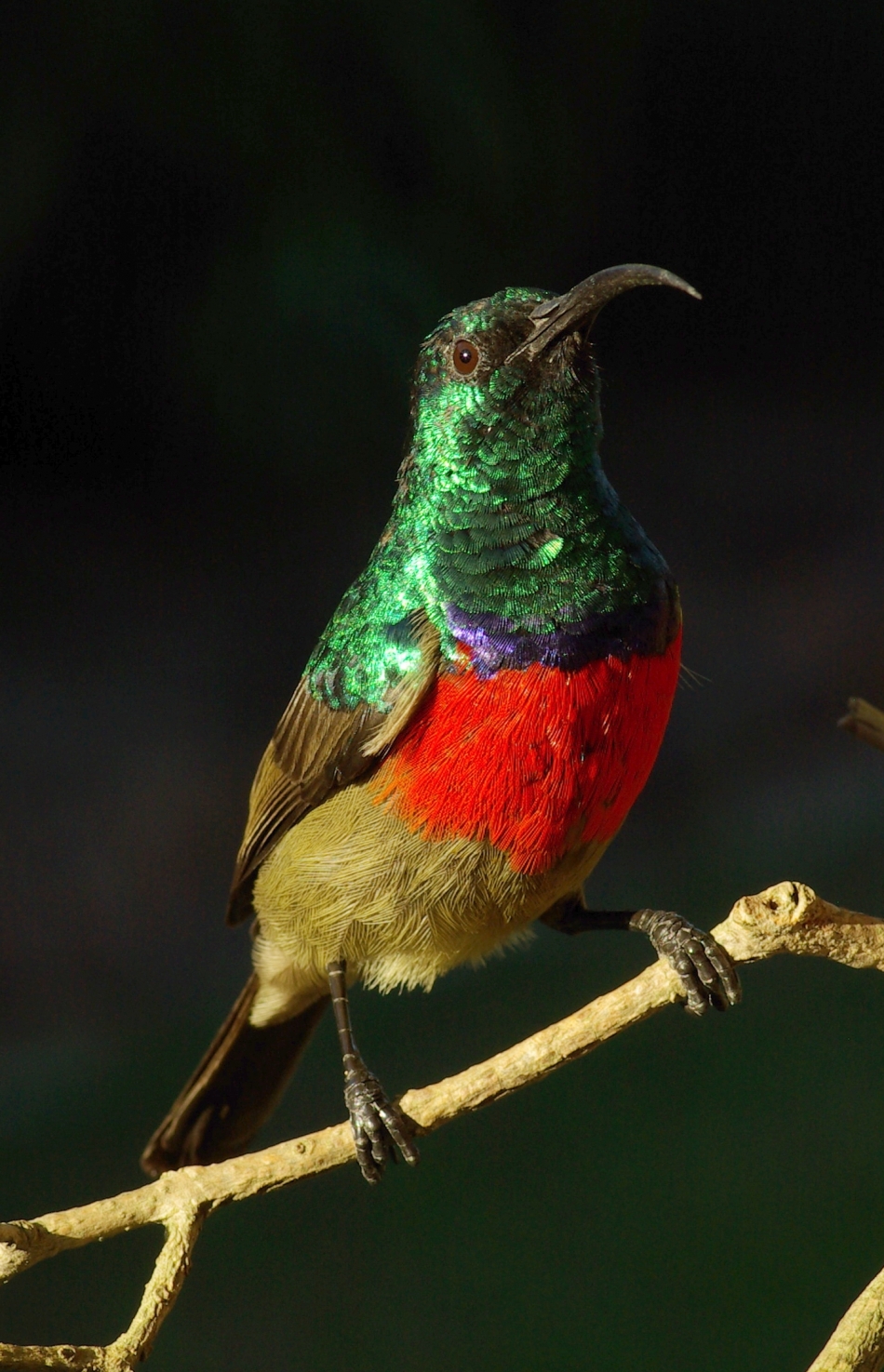 I was able to re-attach the nest about 1m from its original position. The adults continued to feed the chicks, none the worse for wear and they eventually fledged.
-Advertisment-
0
SHARES
ShareTweet
Share:
Previous
Next