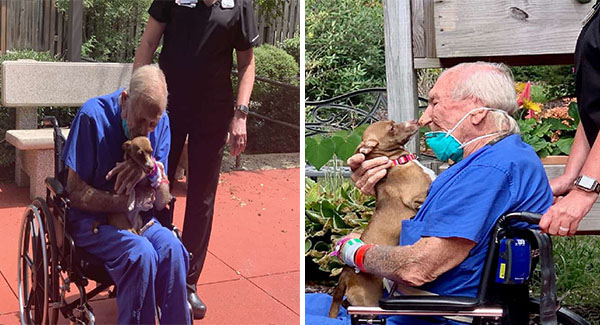 A pet chihuahua has been credited with saving her owner’s life by running to fetch help after he suffered a stroke on his houseboat.

Rudy Armstrong, 88, calls his furry companion, Bubu, by calling out to her after waking in his armchair to find one arm and one leg paralyzed. Unable to reach his phone, Armstrong locked eyes with Bubu and said, “I need help. Go get Kim.” Bubu, a Chihuahua mix, knew exactly what to do.
She raced off the boat and ran toward the marina, where she found Kim, the dockmaster. “She came right up to her and rather than her usual greeting of barking and jumping and licking her, she stopped right in front of her and laid over on her side,” Brandy Popp, public relations manager for CarolinaEast Health System, said. He’s not as gentle as usual, his every move is rushed as if he wants to say something. And immediately, Kim understood, he quickly followed the dog.Kim followed Bubu back to the boat, where she discovered that Armstrong had suffered a stroke and called 911. Paramedics brought Armstrong to the hospital, while Kim looked after Bubu.

Thanks to Bubu’s speedy actions, her dad is recovering well. But after weeks at the hospital and rehab facility, Armstrong missed his little friend more than anything.

“I went to Rudy’s room to hear the details of Bubu helping to save his life and I had the pleasure of sitting with him for over an hour, hearing story upon story of his life, his time in the Navy, and his special bond with Bubu,” Popp said. “The fact that he has no close friends or family nearby led me to attempt to orchestrate a reunion between him and Bubu.”

On the day of the reunion, the dog couldn’t stop getting excited when he saw his owner again.
He happily ran over and kept kissing Armstrong. “Leading up to her arrival, Rudy was practically bouncing in his wheelchair like a kid on Christmas morning,” Popp said. Armstrong has since been released and is back on his boat with his beloved Bubu — able to live another day full of cuddles and kisses.